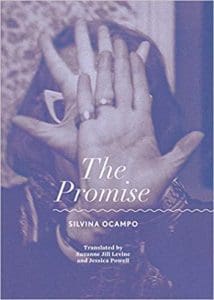 In The Promise (120 pages; City Lights Publishers; translated by Suzanne Jill Levine and Jessica Powell) the nameless narrator, after falling over the handrail of a transport ship, recollects her life in a disparate series of largely character-based vignettes as she waits to drown or be rescued at sea. As she comes to in the ocean, she promises Saint Rita that in exchange for her life she will commit to publishing a book documenting a “dictionary of memories that are at times shameful, even humiliating.” And so the lone novel by the prolific Argentine author Silvina Ocampo (1903-1993) becomes a brief study of memory, examining how those facing imminent death attempt to plug the holes of their past with the many meaningful scenes—minutiae reimagined, acquaintances revisited, and action relived—that constitute a life lived.

Perhaps what’s most interesting and impressive about Ocampo’s investigation of the mind is just how collective the retelling becomes. Our protagonist does not so much retell the scenes of her life as recount scenes of the lives of others in relation to her, acting more as a voyeur than a direct participant. Even when a potent sensual memory is conjured it is not the narrator’s memory that’s evoked but the imagined memory of another character,:

He caught a whiff of her hair that emanated a dirty brush smell in the heat, like the heads of those people in his childhood kneeling in confessionals, smelling of cheap perfume and powders, of barbershop pomade.

This tactic raises intriguing questions about what is real and what is imagined in one’s mind. Ocampo, whose sister Victoria founded the legendary literary journal Sur and whose husband was Adolfo Bioy Casares, suggests it is not merely the fact of what happened, but rather the reality of a feeling that may or may not have occurred that stamps itself indelibly upon us.


Entire passages, pages even, repeat themselves throughout the book. As Ernesto Montequín states in the introduction, this repetition is by design, and serves to offer additional perspectives or small variants to the narrative, reshaping the narrator’s identity. In short, this tactic demystifies the idea that memory is stable, suggesting its very nature is nebulous.

Those times when I felt unhappy now seem so joyful, when my nephews would get their hands so filthy playing with dirt that when we’d return to my sister’s house, instead of taking a bath or going to the movies, I’d have to clean their nails with Carpincho saddle soap…

But while most of the “action” of the novel lies in a fictionalized past, the most intense moments arise when the narrator takes the reader back into the present, into her drowning. Often whole sections and trains of thought are sharply cut off, jolting us out of a reverie such as in this passage that follows a particularly emotional encounter between two characters:

Poor Irene. She didn’t like the water. Sometimes we would go swimming in the river, but she almost always stayed on the bank. What would she think of the ocean, this ocean that surrounds me! She would have died a thousand times over already. There’s too much water to cry. Wouldn’t my eyes drown?

As The Promise unfolds, we learn this is not a story about an individual’s persistence, but rather the persistence—sometimes to the point of being oppressive—of the memory of an individual. Her “mental journey or itinerary” through her past begins as a way of staying awake to stave off death, but soon morphs into something altogether different. Later, when she appears to finally be ready to accept her fate, her mind rejects the idea entirely. “Dying is the only sure thing. Now I can finally die. But how to do it? It’s as impossible as ever.”

These are the moments that elevate The Promise into a higher echelon of letters; simultaneously, death proves evasive and nostalgia serves as a survival tactic. All the while readers get to witness the wondrous tightrope act Ocampo performs, traipsing back and forth between past and present. It’s soon evident that failures and inconsistencies along the way are not cause for concern, but reason to celebrate the potential of our own memories.