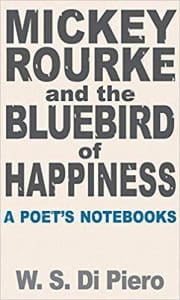 The relationship between a writer and their notebook is a strange and sacred one. W.S. Di Piero has been keeping a notebook since he first started writing, and, in the poet’s own words, his notebooks have taken on many roles, including “workshop, interrogation room, [and] monk’s cell.”

In Mickey Rourke and the Bluebird of Happiness: A Poet’s Notebooks (Carnegie Mellon University Press; 88 pages), we are treated to selections from three decades’ worth of De Piero’s notebooks. Through this collection, Di Piero hopes to “craft a shadow self-portrait composed of hopped-up episodes from my mental and emotional life.” The resultant book is a literary time capsule that brims with stray observations and confessions, citations and criticism—an intimate space for Di Piero to “say small things intensely.”

While Di Piero occasionally recounts his daily life (interactions on public transit, meetings with friends, overheard conversations on the street), he more frequently journals about poetry as a practice and form. As a critic and poet, he places poetry in conversation with other art forms, like painting and music, and puts himself in conversation with countless other poets, such as Wordsworth, Yeats, Baudelaire, and Keats. He is also amusingly opinionated about the role of the poet: “I think the poet’s work,” Di Piero writes, “is to tell the struggle, to attempt to reveal the order or our dream of it.” Examining the life of the poet, then, is an act of introspection; when Di Piero writes about “poets,” he is really writing about himself.


Each decade brings new interests. The 2000s, for example, see Di Piero writing often about cityscapes and transit; the 1990s, melancholy and Italy; the 1980s, childhood and Van Gogh.

Fascinations wax and wane throughout the years, but Di Piero’s curiosity remains constant. A sense of place is also continuous throughout Mickey Rourke: each entry is “saturated with wherever I was writing” at the time—indeed, the author brings places like San Francisco, Bologna, and Chicago to life in lovely detail.

Di Piero’s more diaristic writings prove to be some of his most engaging. In the 1990s, he is clearly struggling with depression, or as he calls it, “clinical melancholia.” His meditation on his own bed is one of his notebooks’ most moving entries:

The bed is the best and worst place. It’s the island where you’re safe, if not from the serrated confabulations of your own consciousness, at least from the afflictions the world beyond the bed will, you’re certain, bring you. It’s the worst place because the longer you’re there, the more it loves you, the more it renews its sticky torpor. It’s a safe place to consider killing yourself.

Di Piero often revisits certain ideas, sometimes in nearly identical words. In the 2000s, for example, he quotes Kierkegaard: “The whole of existence frightens me;” and in the 1980s, he recalls William James’ “horrible fear of my own existence.” He also repeats several maxims again and again, like this one about loss: “Writing about loss thrills and energizes because loss is another form of transformation.” It makes one wonder what it is about these repeated phrases that affect Di Piero so intensely. “For this here book,” Di Piero writes in the postscript, “I picked notes having to do with matters I still go round and round and that still lose my sleep.” This raises the question of how much of Di Piero’s journals have been expurgated, and why he’s “picked” certain entries over others.

Unlike other vignette-driven books, like Maggie Nelson’s Bluets, the fragments of Mickey Rourke rarely connect with each other, and their order feels insignificant. But in this way, the book channels the true nature of the human mind: disordered and random, riddled with obsessions. “The entries,” Di Piero writes, “are undated floaters—that’s how they come into and live in my consciousness.”