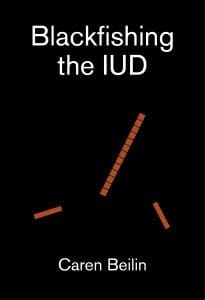 Just over halfway through Caren Beilin’s newest book, Blackfishing the IUD (165 pages; Wolfman Books), she states the simple truth that we have already learned, have already felt and suffered with, over the course of our engagement with this work: “Reading is ruining my life.”

Recounting her own experience with medical gaslighting, rheumatoid arthritis (RA), the copper intrauterine device (IUD), and what it means to have metal—a toxic thing, an inflaming thing—placed in the uterus, Beilin’s text is part critique, part personal essay, and part platform for the stories, worries, angers, and generous advice of other affected women. Her voice is unique, but her story necessarily isn’t; it’s a facet of this memoir which makes it both highly particular and eerily resonant. At times, Beilin’s work reads as a manifesto, at others, a poem. But always, as a plea: “…what is copper combined with woman?” she asks. “What does the IUD do when it is not doing that sentence? The womb is wet. It rusts.”


Reading this book will ruin your life. Not because the information will be new to many of us, but because it takes things women have known for some time, that they have felt burning in their abdomens and fuming in their blood, and grants them transfiguration. The relegated-fiction of online forums, systemically dismissed internal nervousness, visible and invisible pains—all of these things and the copper trail which follows them are reinstituted as meaningful. Here, meaningful means allowed to hold something. To contain truth, and to mandate that these truths, in these forms, be accepted as legible. Copper becomes a readable subject, as does the woman’s body, and the woman’s voice, emanating from that same entity which we must learn to trust. These things have always been trying to talk with us. Blackfishing demands that we listen, and that we say something back, even (or perhaps, especially) if it is just, I believe you.

This project is life-ruining in the sense that things must sometimes be shredded to be understood. Beilin takes her subject to its extent: her descriptions of pain—the pain brought on by her copper IUD and subsequent RA, the emotional pain of navigating the medical world—and the routine dismissal of that pain, are almost impossible to sit through without, at the very least, a break, or, more severely, intermittent panic attacks. Breakdowns at the thought of the birth control in one’s own body, and what it might be doing when it doesn’t perform “that sentence,” the sentence of Planned Parenthood and other providers, the phrases and gestures which market the IUD not just as healthcare but as a political proclamation. “Now we are awesome cyborgian women, feminists with metal we enjoy in our womb.” Blackfishing isn’t a testimony against birth control, nor against the right of all people to access it. But it does throw necessary skepticism at the way reproductive healthcare institutions wield the concept of choice. Choice is important, necessary. But perhaps the choices we have are very, very bad. Are inflamed.

Beilin, whose past works include Spain and The University of Pennsylvania, employs tactfully constructed prose, as beautiful to read as it is horrible—and overwhelming—to sit with. It incites anxiety, but also, invites community. To read this book is to never be alone, to find things funny as well as terrifying and to, at last, situate invalidated fears in a legitimizing network of corroboration.

Blackfishing the IUD is a little book from a little press (the wonderful Oakland-based Wolfman Books). A podcast series will accompany its release, as if its own smallness can acknowledge itself. The effect of reading Blackfishing is unfathomably vast, but like any well-executed critical project, it does not pretend to be an end, an answer, or enough.