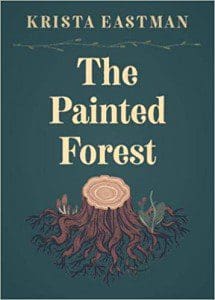 Krista Eastman had been living away from her native Wisconsin for many years when she began writing her essay collection, The Painted Forest (144 pages; West Virginia University Press), and it was during this time that she began to consider the meaning of home. Once she left the small, working-class town in which she was raised, she told Poets & Writers, she found she often “had to explain myself and my home to others, putting a complicated place onto maps where previously there’d been nothing at all.” That’s when she “became interested in the role of telling about a place, in talking back from the periphery.”

Eastman began asking herself what it means to be from Wisconsin, from the Midwest, or from any place at all. And what does it mean to leave one’s home, or to return? Though the nine essays of her book, she attempts to find answers, tapping into geography, history, and myth-making to do so, all while seeking out the least known corners of the country.

In the first essay, “Insider’s Almanac,” Eastman considers how we define being from a place and what distinctions exist within that sense of belonging. “Who is the more thoroughly acquainted with the world in which he lives?” she asks. “Whosoever can produce the most detail.” The Painted Forest proves Eastman to be thoroughly acquainted with the world in which she lives; insatiably curious, she renders people and places in exquisite, elaborate detail.


Reading her extraordinary descriptions, it’s clear Eastman writes not just to inform her reader, but also to make sense of her surroundings, to create meaning and narrative where there previously may have been none. The opening lines of the prologue, “Scrap Metal,” in which she recalls driving through her hometown as a child, display Eastman’s gift for immersive narration:

This tubby steel machine, this 1978 Chevy Malibu station wagon, careens a large family forward, makes tinny the sound of our quarrels and questions while highway approaches and then unfurls behind, approaches and then unfurls. It is from this wagon that we view the sculptures, the scrap metal forms welded at weird angles onto themselves, forms that groan at ground in the way of all heavy equipment, but forms whose slanted reaches skyward warp and mock the object of industry.

Most of the collection’s essays deal in hyper-specificity, focusing on little known locations and hidden stories. Eastman is drawn to eccentricity and complexity, and she revels in the act of uncovering. “My writing,” she told Booktimist, “[has] a tendency toward putting off-the-map oddities at the center of the universe.” She actively constructs her own universe by uncovering obscure histories and geographies, and letting in light.

Mostly, she attempts to play with our ideas of regionality and universality, challenging notions about which corners of America—and the world—are worthy of exploration. “The Midwest,” writes Eastman, “like many of the earth’s places, tilts toward under-imagined and overly caricatured, that it might not be a definite place at all.” This is one of the collection’s most important considerations. While Eastman spends much of the collection considering physical space—natural wonders, art objects, landmarks—she also delves into the psychological space each region occupies. The Midwest and many other places, she argues, are less defined by their geographic boundaries as much as their cultural and mythical ones.

The best essays in The Painted Forest are the most personal ones. Ultimately, it’s when Eastman taps into her own experiences that we are treated to the most moving moments of the collection. Take this reflective aside from the titular essay, in which Eastman returns to her hometown:

Born here, from this place, I knew how to move across the land, how to be raised up for the purpose of letting go, to be lifted and lowered, gathered and then released: to roll down and then to work my way up again, to the top of the ridge, to the modest view of more hills, to the shortest glimpse of eternity.

Sometimes The Painted Forest gets bogged down by its most distinctive features—Eastman’s descriptions and specificity. The florid language and narrow focus in excess can grow tiresome. Regardless, The Painted Forest remains an intricate portrait of place and belonging. Eastman is making an offering to us; she is sharing something special, a part of herself. “One way to share your home,” she writes, “is to place it carefully, in a controlled way, onto someone else’s map.” That is just what she’s done—and for that, we should be grateful.