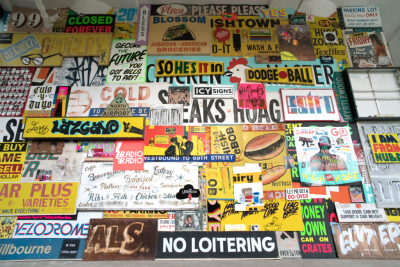 On a Friday afternoon, I visited the Stephen “ESPO” Powers “Daymaker” installation at SFMOMA. “Daymaker” includes two site-specific wall-size murals covered in Powers’ signature ideograms: a simple illustration of an everyday object accompanied by witty, semi-aphoristic text. (Powers began his career as a graffiti artist under the moniker ESPO.)

Of the two murals, the one on the east wall is the more popular one for picture taking. It has more blank spaces between ideograms and better light. The picture-taking comes in two genres: selfies or portraits. You can pose next to the brick wall covered with the words “BACK GOES HERE.” Or you can stand next to the matte yellow Post-it that reads “WHO ASKED YOU?” These shots are perfect for social media; they provide a novel background with a caption already included.

Some of Powers’ texts edge into the territory of Instagram Poetry, a genre defined by pithy sentimentality. I can imagine the phrase “I GET LOST TO GET FOUND” adorning a timeline accompanied by a picture of a beach at sunset. In “Daymaker” Powers pairs the phrase with a cartoonish briefcase that looks like it belongs in a noir comic. It’s the visual equivalent of sarcasm, and it evokes the famous Barbara Krueger work that exhorts “I shop, therefore I am.” It’s not art specifically made for a vapid viewer, but art that is happily misread.


Some of the more ambitious photo-seekers will pose for whole minutes in front of Powers’ east wall. The most determined of the bunch that day were a trio of women with slick hair and thick eyebrows, who took turns posing and taking pictures. Observing them, I learned two important rules of modeling: 1) suck in your stomach and 2) the logo of your handbag should be facing out. It takes a lot of forethought to look this carefree.

The photoshoots blocked the art, and I felt the urge to look away. I didn’t want to interrupt, or worse, ruin the game of pretend in-progress. The relationship a person has with how other people see them is an intimate one; it didn’t feel right to intrude.

If I were to have my picture taken with one of Powers’ works, I would pick one of six canvasses on the under-observed south wall. My favorite of these has two, dark blue painterly fists bumping. I felt I was seeing the artist’s hand both literally and figuratively, with yellow action lines radiating from the point of impact. The fists are framed with the words “NOTHING TO SAY, SOMEONE TO SAY IT TO,” which describes most people on Twitter.

Every trip to the museum ends at the gift shop. Here you can buy toilet paper designed by Powers, packaged with the words “If only opinions were as useful.” It’s the perfect item for those who want a physical souvenir of the exhibit, and not just a digital one.

“Daymaker” will be on exhibit on the Third Floor of SFMOMA through January 1, 2020.

Dominica Phetteplace is a math tutor who writes fiction and poetry. Her honors include a MacDowell Fellowship, a Pushcart Prize and a Rona Jaffe Award. You can read her short story “The Story of a True Artist” in Issue 115.