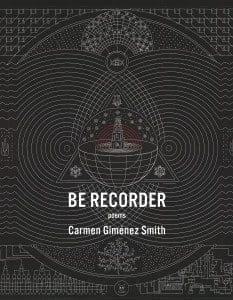 Anyone who has ever questioned the capacity of poetry to do something needs to read Carmen Giménez Smith’s newest collection, Be Recorder (88 pages; Graywolf Press). Be Recorder refuses to pretend it lives elsewhere, in some untouchable world of the lyric. Rather, each poem is undeniably here, in the now of state-generated violence and imperialism, of oppressive immigration policies, of love, of motherhood, of writerly politics. This list, while certainly marking many of Giménez Smith’s major attentions, is painfully incomplete: Be Recorder sees everything, even what it has yet to witness.

It is this impulse –– to witness and uncover, while also pointing toward the unknown –– that makes this collection and its politics so compelling. You don’t even have to open the book to hear its first demand, conveyed through the well-chosen title: “Be Recorder.” To illuminate historical harms, personal traumas and joys, we must first record them; to spectate actively is to remember and to write down, to capture each occurrence and refuse to let it go unnoticed. A “recorder” is, however, not just the person who keeps records, but the apparatus of recording itself. This complicates things: the power of witnessing can be revolutionary for the unseen, but such an apparatus can also be wielded by those forces the revolutionary witness pushes against. The state, too, is a recorder, one which dictates and archives a dominate understanding of history, marks borders on the land, shuffles, expels, and kills those defined as deviant. Be Recorder understands the messy role of documentation and declaration:

In a single stanza, both the “west with its grinding machines” and a lover recording limbs appear. The personal grace and closeness of being seen in a moment of intimacy, and the violence of being watched and restricted by the nation’s “frontier and border,” exist on the same plane. This is not the only instance of Be Recorder‘s play with oppositional truths and the paradox of radical gesture:

Can art serve the state? The state has certainly exercised art as a means of propaganda, and artists have often, quite willingly, chosen to allow it. In recognizing this dichotomy and historical tension, the poem highlights an important truth, a manifesto posed as a question. To truly serve art is never to serve the state in any capacity, which is to say, that which seeks to meet the demands of empire should hardly be considered art at all.

This is just one reading of this poem, this line, this book, yet it’s hard not to feel galvanized by the possibilities it offers. Be Recorder operates as both a mirror and an imagination. We are rallied by it, called to attention, to action, to sight:

One thought on “‘Be Recorder’ by Carmen Giménez Smith: A Call to Action”