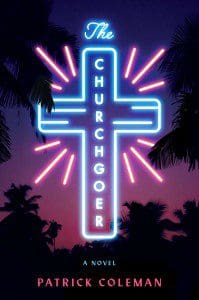 Even if Patrick Coleman’s first novel, The Churchgoer (354 pages; Harper Perennial), was not prefaced by a quote from Raymond Chandler’s The Long Goodbye, the story’s noir flavors would be unmistakable. Mark Haines, a former youth pastor turned burned-out security guard and amateur surfer, lost his faith and more than a step when his beloved sister committed suicide years ago. In his rearview are a wife and a teen daughter who can barely swallow their bile to speak to him on the phone every so often. Meanwhile, always close at hand is the alcohol addiction he fights to keep a lid on. (“Alcoholics, like pastors maybe, are never recovered but always recovering,” he notes.) Mark spies a chance to do some minor good in the world –– a shot at redemption would be too much to hope for –– when he happens across Emily, a young woman by the side of the road, trying to thumb her way from Oceanside to Seattle.

Mark offers to buy her a meal at the local greasy spoon, an act of generosity he must shamefully admit is at least somewhat motivated by his attraction to Emily, but little does he know his good deed will go far from unpunished. Emily isn’t a femme fatale, but she might be that other noir staple, the Woman in Trouble:

She wrapped the leash around the tail of the board and walked up the beach, a classic California profile in nearly full shadow, her features existing only in a burned, golden shade, like the saints on Renaissance altarpieces that seemed to be inwardly self-illuminated. But Emily couldn’t be the surfer girl the Beach Boys sang out, the girl half the young (and not so young) men around her lusted for, laughing through evenings at bonfires and ukulele sing-alongs. That was just her darkened profile, a corresponding outline. And if she was in shadow, my face was catching the light, and she was coming my way.

The further Mark becomes enmeshed in Emily’s life, the further he enters a world of violent drug dealers, underhanded evangelicals, and powerful real estate magnates. “San Diego’s a small town,” Mark notes, “and the evangelical scene is even smaller.” Mark is far from a seasoned private detective like Phillip Marlowe, but his own self-loathing and guilty conscience will prove all the motivator he needs to dig deeper into the conspiracy once Emily vanishes without a trace.


The Churchgoer is populated with the kind of hard-boiled monologues one associates with the noir genre (“Time and perspective,” Mark muses, “two unrelenting, changeable assholes –– but not without a sense of humor”), and its cast of pistol-wielding drug peddlers wouldn’t be out of place in your average detective novel. But Patrick Coleman’s background is in poetry (his poems previously appeared in ZYZZYVA Issue No. 94), a background that’s revealed not only in The Churchgoer’s lush language –– even the seediest and most squalid neighborhoods of San Diego County are rendered with great care –– but in the way Coleman is far more interested in Mark’s crisis of faith than a conventional plot.

As Mark’s amateur investigation (which includes impersonating a police officer when necessary) sends him undercover to one of Southern California’s most successful “mega-churches,” he comes face to face with what he views as a mirror of his former hypocrisy. He ultimately can’t resist the opportunity to ruffle the church’s Santa Claus-esque pastor:

He was a good actor, a professional preacher, face muscles that could bench three-hundred and open a beer bottle with nothing but a dimple. Speaking was his way of control, his lifeblood. I didn’t want to let him have it, kept taking it away.

Even so, Mark must eventually acknowledge that his quest to “save” Emily might merely be an attempt to make up for all the ways he’s let down his daughter –– assuming Emily needs any saving at all. In the end, Mark’s lot in life stems from one decision: the moment he turned his back on his religion and family when the foundation for his faith crumbled. But the numerous close calls he encounters while searching for a trace of Emily will cause him to question the dogma of hatred –– hatred for himself, hatred for the world –– that has served as his bitter fuel in the intervening years.

The Churchgoer is at once a cracking noir yarn and an introspective examination of the limits of belief and doubt. Late in the novel, Mark experiences his own “dark night of the soul”; with Mark trapped and in the dark, quite literally, this section allows Coleman to dive deep into Mark’s sensory experience and mental battle as he struggles for air. It’s a test of will as great as any faced by a Biblical hero (like Daniel tossed in the lion’s den), and Coleman renders the scene with language that recalls the opening of Genesis:

Nothing. I was adrift in nothing. Nothing to see. Nothing to do. Nothing to hear, except my own breathing and whispered profanity.

Back against the wall, Mark finally encounters a situation that his quick wits and smooth tongue can’t get him out of. Like so much of The Churchgoer, this moment serves as a reminder: no matter how far we think the past is behind us, no matter how self-reliant we claim to be, there always comes a reckoning. In this case, the reckoning packs a punch, but so does Coleman’s unsentimental prose in this stellar debut.