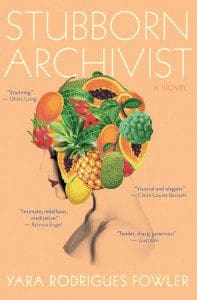 The task of organizing one’s life experiences into a comprehensible narrative is a universal one—why else do so many of us go to therapy? Through our internal dialogue we create stories, or perhaps allow ourselves to live according to the stories that best help us cope. This is a work of inclusion and omission, of unearthing and rearranging:

Yara Rodrigues Fowler’s first novel, Stubborn Archivist (378 pages; Mariner Books), is constructed through this sorting of memories. The book that emerges is funny, painful, and healing. It reads like opening up someone’s journal, as if the never-named narrator stopped to jot down pieces of her story as they burst into view. The novel has the intimate quality of a narrative not yet organized, straddling prose and poetry through its ambiguous dialogue and internal monologue. Rodrigues Fowler refuses to undermine the preciousness of a moment, allowing singular thoughts and actions to take up room, while never shying away from blank space on the page.

Stubborn Archivist follows three generations of women in Brazil and London. There is the unnamed narrator, a young Brazilian-British woman struggling with her digestive health and reckoning with residual trauma from her first relationship. Then there is her mother, Isadora, a doctor from Brazil who moved to London with her British husband as well as with her younger sister, who lives with the married couple and grapples with depression. And finally, there is Cecília, grandmother and matriarch, who resides in Brazil with the narrator’s grandfather. In their own ways, each of these women experience the impact of life under Brazil’s military dictatorship.

Stubborn Archivist roots the personal in the political, as the legacy of the dictatorship trickles through the characters’ experiences of romance and family. The narrator recounts her early relationships and her brave confrontation of an ex-boyfriend regarding his acts of assault. Her sexual experiences frequently cross boundaries, both cultural and consensual:

Quiet moments like these give Stubborn Archivist a singular intimacy. Rodrigues Fowler uncannily captures that home-alone feeling when one has complete privacy: as the saying goes, the true measure of our character is what we do when no one is watching. Rather than evaluating her narrator, however, Rodrigues Fowler seems to question how she grows through these private moments, and how they reflect her interior life. The reader watches the narrator rewriting and revising an email to her boss while bedridden with Irritable Bowel Syndrome, waxing fastidiously before flying to Brazil, and biking through the streets of London at night. Stubborn Archivist, even as it spans decades, is built from these solitary moments. Layers and layers of experience accumulated through generations are ultimately embodied in the characters’ daily routines. Rodrigues Fowler writes a story of multicultural identity as it is impressed upon the physical bodies that live it. The subtle power of the novel’s ending lies in the narrator taking ownership of her body, despite the ways it has been fetishized, other-ed, and assaulted:

Caetano sings tinny music into the night. He says, you don’t know me at all. You move your body.