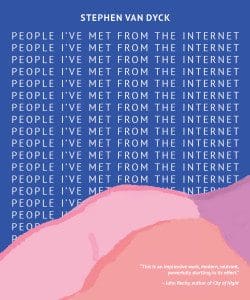 Stephen van Dyck’s People I’ve Met From the Internet (151 pages; Ricochet Editions) is the ultimate memoir for the Information Age: a series of extraordinarily personal vignettes derived from a data spreadsheet. The book spans 11 years and takes place in multiple states, mostly roaming the arid space between Albuquerque, New Mexico, and Los Angeles, California. It reads like a grand road trip in the age of dial-up Internet.

The book’s earliest pages take the form of a table divided into columns like “REAL NAME,” “SCREEN NAME AT THE TIME WE MET,” and “X=TIMES MET OR DAYS SPENT.” When starting the memoir, you might assume these would be pages to skim, a visual stunt to bring the reader into a digital headspace. However, the data becomes a form of narration unlike any you may have encountered before. The reader becomes a detective and decoder: the simple entry “x99+” under “X=TIMES MET OR DAYS SPENT” reveals a long-term relationship, and entries like “watched Survivor at his apartment” clues you into the context of the early aughts.


Van Dyck’s memoir proceeds as a repetition of this list, but this time with annotations, and each successive entry generates a jarringly precise depiction of coming into one’s sexuality at the advent of the social web. Throughout the annotated entries, the men and women van Dyck meets online often play as much of a role in his adolescent development as his father and mother, guiding him into his burgeoning sexual identity. After the loss of his mother, and aided by the sometimes inept but unfailingly kind support of his father, van Dyck sets out on his own, following a connect-the-dots map from AOL user to AOL user around the country. Exploring glowing gay landscapes—in the blue light of computer screens and beneath the rosy warmth of Southwestern sunsets—van Dyck meets tops and bottoms, otters and bears. He acquaints himself with adulthood in strangers’ apartments. Throughout, van Dyck’s writing is unnervingly relatable; his explicit depictions are vulnerable, candid, and human:

When we started to have sex, Luke asked if I had wiped…As I lay on my side, Luke wiped my ass. Luke told me I needed to wipe properly. Inspired by Luke’s bowl of lubes, I filled my pockets each time I went to MPower or the Under 21 Group, and slowly amassed a collection of my own.

Van Dyck’s prose mirrors the dataset the book begins with: a linear presentation of facts. The details he includes are both mundane and mosaic, and as he lists them the story coalesces. In this way, through frank snapshots of the people around him, a dynamic portrait of an evolving artist is rendered.

When the memoir catches up to the present and entries start to occur in real-time, alongside commentary on van Dyck’s self-doubt regarding his writing project, the text becomes something like conceptual art:

I wondered later if I met Robbie because I knew it would be a good story. I was starting to have this question about many of the guys I was meeting. Or was the list project giving me an excuse to do what I already wanted to do?

In People I’ve Met From The Internet, we share in van Dyck’s struggles at the bleeding edge between life and art, and wonder what to make of the man behind the experiment. Perhaps the point of it all, his book seems to suggest, is simply to delight in the details