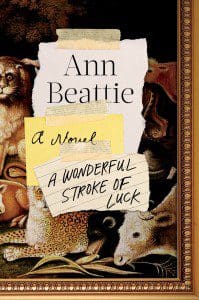 Ann Beattie’s 21st work of fiction, A Wonderful Stroke Of Luck (288 pages; Viking), has been taking a beating in some quarters, notably the New York Times (for, among other capital sins, spelling Spalding Gray’s name incorrectly).

She’s been laboring under the mantle as a voice of her g-g-generation ever since her first novel, Chilly Scenes of Winter, in 1976. It’s a jacket she hates, understandably, but it was refreshing at the time to find fiction about people and places (although usually not politics) of the ‘60s that didn’t read like it was written by Richard Fariña.

The cool, evaluative voice—hip but not ostentatious—of her fiction, then and now, probed the psyches of lost souls struggling to find their place in a world not of their own making. (Chilly Scenes was closer to a portrait of slackers than the counter-culture, but the term had not yet come into use…so much for journalistic generalizations.)

The new novel takes its title from a quote by the Dalai Lama (“Remember that sometimes not getting what you want is a wonderful stroke of luck’’), but rest assured, Beattie has not gone New Age on us. Her characters certainly don’t get what they want, let alone what they need, and most assuredly don’t feel lucky about it.

It’s a portrait of millennials (again with the labels…) at the private prep school Bailey Academy in New Hampshire, under the heavy influence of Pierre LaVerdere, their campy, cryptic instructor. They may bear an outward resemblance to the kids in The Dead Poets Society or A Separate Peace. But the author is stalking bigger game, offering pitiless status details with deadpan reserve.

Setting up a meeting of the Honor Society, she notes, “Today there were also enormous seedless grapes—a nod, perhaps, to their recent discussion of Cesar Chavez.’’

The over-achieving, desperate-to-please students react with scorn when, in an exercise in adolescent “Jeopardy,” someone replies “John Cheever’’ instead of Gatsby after LaVerdere asks a rhetorical question: “Literature. In this twentieth-century novel, a character attends a sparsely populated funeral after the protagonist is found dead in his pools.’’

It may sound a bit precious, but these kids are no less worthy of attention for being privileged than Holden Caulfield at Pencey Prep. Their angst is real, however unearned it sometimes seems, and Beattie has previously explored this fictional terrain in the portrayal of the funny, troubled teenager, Jocelyn, in the linked tales of The State We’re In: Maine Stories.

Here, the tone changes, abruptly, in Chapter Six, when the main protagonist, Ben, gets unwelcome news. “On 9/11 LouLou was the town crier, banging on her classmates’ doors. It took Ben some time to realize that he hadn’t been awakened from a nightmare. Mrs. Somersworth, the school nurse (rumored to have had a drug problem herself, when she was their age) handed out tissues and herded them into the TV room to look at the shaky footage, the incomprehensible smoke in New York.’’

The personal swiftly becomes political. The father of Ben’s friend Jasper, it is revealed, died in one of the towers, where he was meeting his divorce lawyer. But for these beleaguered kids, the echo chamber reminder, “9/11 changed everything,’’ tolls for a while, but doesn’t fundamentally alter their fates.

After Ben graduates, he skips college, moving to upstate New York for dead-end jobs and dead-end affairs with women he has trouble connecting with. In a section that calls to mind Bret Easton Ellis, if he were (somehow) in control of his instrument, he meets his ex-girlfriend Arly at the Gansevoort, where he spots Cindy Crawford, “her high heels clicking, taking the lobby entrance into the bar. The security thug was an enormous horror movie fly with multi-faceted, glinting pupils. The guy pushed a button as Ben approached to let him on the elevator, indicating acceptance at the same time he indicated contempt.’’

“The door to eight-sixteen was cracked open. What awaited? He walked in, realizing with relief there’d be a mini-bar, he could have a drink and calm down even if it was too late to rethink things. He could catch his breath.

She lay naked on the bed, turned toward him. Had she been crying?’’

More portraits in pain ensue: Ben’s crush on Gina, his next door neighbor’s wife; a tragic-comic visit from his Bailey friend, LouLou, and her girlfriend, Dale, who want him to be a sperm donor; and failed attempts to reconnect with Jasper, who’s moved to California to another life, another world.

Things come crashing down when he hears from LaVerdere (he’s usually referred to by his last name, the adolescent tropes prevail). A confession, and a confrontation, ensue. No spoilers here, but brace yourself, this is no easy conversation.

The pose has been broken, and the poor, bare, forked animal remains, though not without pretension, since that’s all his former teacher has to hold on. Ben holds on, too, trying to pick up the pieces.

The novel ends with his driving Dale (she and LouLou have broken up) to an event at the Brooklyn Botanical Gardens. Both are broken, but doing their best.

“The cars were moving fast on the West Side Highway,’’ Beattie writes, echoing Fitzgerald, and Jordan Baker. “Once you knew how to drive in New York, your instincts never failed you. But you couldn’t hesitate, once you pulled out; you never signaled, and when you shot into the next lane, you had to keep accelerating…

“They continued downtown—a word that had become, in his lifetime, synonymous with what wasn’t there. They could build all the new buildings and parks and memorials they wanted, but downtown would always be the absence of what used to exist.’’

But it’s Ben’s own absence, his life as a suffering spectator, which he’s really mourning.

Baby, it’s cold outside. The truth hurts. But it’s worth knowing.

Ann Beattie will be at the Bay Area Book Festival on Sunday, May 5th at 3:15pm,  in conversation with Carol Edgarian. More details available here.