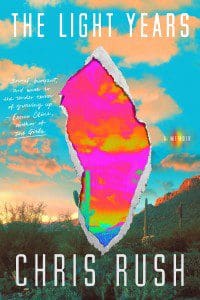 Chris Rush’s memoir, The Light Years (368 pages; FSG), opens during the Summer of Love. In the suburbs of New Jersey, Rush is the sweet yet strange middle child in a family of seven kids. As a boy, he is obsessed with making paper flowers by hand, maintains an enchantment for a pink satin cape described as a “fashion miracle,” and turns the family’s psychedelic basement into his bedroom. To him, his parents are “the most fabulous –– and most happy,” and he is content to play the part of the devout Catholic son. However, at twelve-years-old, Rush’s world is transformed when his bold older sister, Donna, takes him to a “Be-in,” a day in the park filled with hippies and drugs. Here, she introduces him to Valentine, a charming friend who acts as spiritual leader when he doses everyone with acid. Valentine places a tab of “Orange Sunshine” on Rush’s tongue as if giving sacrament, and for the first time Rush experiences LSD:

In silence, everyone stared out across the lawn. Soon, an agitation began to flutter inside me. Or was it outside? As the breeze moved across the park, the shuddering of the trees was mesmerizing; the lawn rippled like the surface of a lake.
I thought: God’s here.

After this life changing experience, Rush begins to sell drugs at his boarding school and eventually ventures out to the Arizona desert to make a big purchase from Valentine. Here begins Rush’s tumultuous journey of growing up, filled with beauty and agony as he becomes deeply involved in the 1970s counter-culture. His search for a home—and fascination with drugs—takes him all across the country; from Tucson to Marin, Los Angeles, the Oregon Coast, and ultimately back to his parent’s home in New Jersey. Along the way he is accompanied by a cast of eccentric characters: enlightened Christian smugglers, a man who believes he was visited by UFOs, and a nudist drug dealer named Flow Bear. Rush also begins to discover his sexuality and falls in love with Owen, a Mormon boy from Idaho. His love interest and unconventional lifestyle causes tension at home as his father turns into an abusive alcoholic and his mother’s sanity frays at the edges. Rush encounters violence so many times it’s a wonder he survived to tell his story.


While Rush’s story is incredibly interesting and thought-provoking on its own, his writing style lends an honest and mind-bending quality. Rush recounts the highs and lows with a clarity that refuses to glorify or ask for pity. He simply presents his adolescence for what it was: a time of infinite magic and joy as well as one plagued by addiction and isolation.

Although the memoir takes the reader to some dark moments in Rush’s life, overall it serves as a recollection of the wonder of his youth:

When we drove to Point Reyes, to see the ocean, I was dazzled. California was the end of America, where the continent slipped under the sea. One could go no further. It was the place to collect one’s dreams and make something of them. The fantasy of Haight-Ashbury had collapsed into violence. But across the bay in Marin, there was peace.
People were getting back to nature. It was a good scene.

In this way, Rush reveals how the 1970s was a sublime yet turbulent time in American history.

And all throughout this story is Rush’s large-hearted compassion for the friends he made along the way. Amid the derangement and pain, there was always a companion at his side; there moves an air of tenderness for all the people who floated in and out of Rush’s life during those years. It’s difficult to come away from The Light Years without an appreciation for the beauty Rush finds in a seemingly harsh world. Seeing through his perspective could potentially leave readers changed for the better.