April represents National Poetry Month, intended as a way to spread awareness and appreciation of poetry in the United States. To celebrate, each week we will be taking a look back at ZYZZYVA’s recent and distant past to share some choice selections. For our fourth installment, we present “Lost Boy” by Matthew Dickman from Issue No.108: 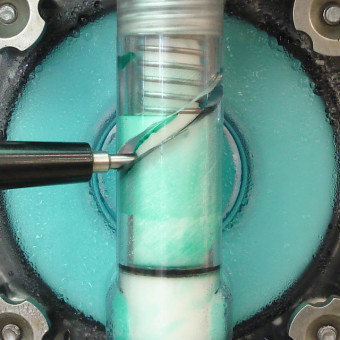 
I’m standing behind the 7-Eleven
moving a crushed-up can around with my foot.
I’m maybe twelve blocks away
from the house I grew up in. I could walk
there right now if I wanted. See who’s living
there and if the house is the same or not the same.
There’s a streetlight washing across the cars
parked back here. Out of the little dark left over
by the light my older brother steps out.
He’s wearing boots and leather pants, a V-neck T-shirt
and a black overcoat. His hair is bleached
and slicked back behind his ears. Under his skin
I can see his veins, all of them, blue like a raspberry Slushy
is blue. Hey, he says, like you might say to someone
you don’t know but might be unsafe.
I’ve been waiting so long for this
but all I can manage to say is you’re supposed to be dead.
You’re supposed to be dead, I say.
I am, he says, but only kind of, and lifts the collar
of the trench coat away from his neck
so I can see the two puncture wounds, two holes kind of
dried up but shiny. Does it hurt?
No, he says, but I feel really sick all the time,
I keep crying and can’t eat anything, some of my hair has been
falling out but I don’t know why. But you’re alive!
I know, that’s why I’m here.
He looks up at the moon and it’s like he’s not looking at anything.
I just wanted to see you, he says, some clouds moving
slowly above us, I just wanted to see the person who did this to me.