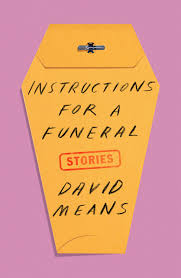 David Means’ latest collection, Instructions for a Funeral (208 pages; FSG), further secures his position as a standout writer of short fiction. Featuring Means’ customary idiosyncratic style, with sentences that span halfway down the page—or more—the book’s prose takes you on a trek, one that demands complete attention from the reader, but repays that attention. Through his dense, carefully crafted sentences, Means transports us through time and place, interweaving action with his characters’ inner ruminations and flashbacks, and in the process touching on the most tender and enigmatic parts of existence. In a section titled “Confessions,” the author discusses what these stories mean to him:

There’s simply no way to distill or describe what’s in the stories, except to say I attempt, to say the least, to respect whatever each story seems to want—not only want to be, but to say in its own way—each one, as far as I can see, an expression of a particular axe I must grind, particular souls in particular situations, and in some cases a voice that needs to say what it says or else (and I feel this, really, I do) it’ll be lost forever to the void.

Several of the stories here take place in upstate New York, near the Hudson River, while others are set in California or the Midwest. In one, a psychiatric patient believes he is a butler, and in another, the death of a close friend turns out to be not what we think. In “The Chair,” a stay-at-home dad contrasts his wife’s exciting career in New York with the “deep solitude” he feels at home, as well as the subtle rewards of fatherhood that come with it:


Love isn’t in the actual grab and heft of body when he comes out of school and runs into my arms, crying with glee. No. Love is the moment just as he comes out the school-house door, standing amid his friends, and searches for my eyes. Love is the second he sees me, and I see him…

In “The Mighty Shannon,” we are dropped in the midst of a marriage plagued by loneliness and shame. The narrator strikes up a relationship with his son’s teacher after sensing his wife is being unfaithful. The story follows the couple through therapy sessions and the moments of affection that come from having a long-time companion. The narrative sheds light on some of the more unattractive yet also sacred parts of the marriage bond, ultimately arriving at a place of forgiveness.

In the collection’s titular story, the narrator gives precise instructions on how he would like his funeral to occur. Written as a list with obscure, sometimes comedic details, the story explores feelings of betrayal and, again, the meaning of fatherhood. Other works, such as “El Morro” and “Carver & Cobain,” focus on characters on the outskirts of society (a drug addict, and a homeless sibling), providing a personal and empathetic view of them.

In fact, Instructions for a Funeral gives voice to those who often remain voiceless, delivering portrayals of raw vulnerability and urgency that compel one to keep reading. In the collection’s final story, the narrator comments on a need to turn “the harsh limitations of reality…into a story of some kind” and “bring the banality of sequential reality to a location of deeper grace.” Arguably, Means has done just that.