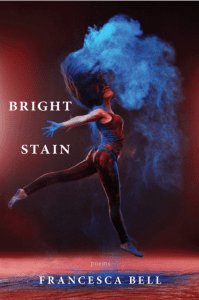 Francesca Bell’s first book of poetry, Bright Stain (104 pages; Red Hen Press), reflects a dark universe in which sexual pleasure and pain are intricately linked. There are bright moments of delight, but few without an aftertaste. This debut collection is impressive for it’s distinctive voice and pungent imagery.

Many of the poems deal with the jolts of adolescent sexual awakening, its heat and surprise and terror, and Bell is not afraid of putting both her vulnerability and hunger on display:

By fourteen, I had transformed,
body gone from tight-fisted to extravagant…
No blouse would button over my excess.
Nothing in the lingerie department could contain me.
The special-order minimizer cost me fifty babysitting hours
and was unyielding as a harness. I believe in brazenness
but no power was ever greater than feeling that tremble
in a surprised boy’s fingers as I removed that bra.
Oh my God, one said, I had no idea.

Many poems barely contain fury, the kind of fury that echoes Plath’s Lady Lazarus, as in the poem “You Can Call Me Ma’am.” This litany of “Having bled and sweated and nursed…dragged/three children to inoculations and speech therapists, to grocery stores and Jiffy Lube and my gynecologist’s office,/to one hundred and eighty drop-offs/and three hundred and sixty-five whining, shrieking/bedtimes…” ends with


Let me tell you, at forty two, it is a deep,
delicious pleasure not to be dewy
or fresh as a fucking daisy.

Not all of the poems calibrate the pain and pleasure of sex, motherhood, womanhood. Some have a religious cast, some have guns and gasoline and smoldering fires. Often the poems seem like prayers, even though the God in these poems is fierce, and his representatives on Earth often abusers.

Whatever the subject, the book abounds in fresh and startling imagery. Part of its charm is how is sneaks up on you in ordinary language:

At nineteen,
I found beauty
waiting for me,
a fast car parked
on a lonely street.

I only send the softest underwear to prison.

If I were a blackbird, I would fly
sensibly over the stinking marsh
and spiked cattails, their tops fizzing white—

my lips opening wide,
in snarling contact with every bit
of his mouth, discovering nerves
in my tongue were hot-wired
down my body’s long center

Though many poems center on domestic life, Bell’s is not the easy domesticity of Robert Hass. Daily life here is filled with “the peril of ordinary objects.” The baby’s cry is “The sound of a pulled trigger,/spraying milk everywhere.” This poet’s world is one of “soft breeze and keening.” Danger and tenderness are inextricably mixed.

And salted through these intimate, fiery poems is the poet’s quirky sense of humor, noticeable just reading he table of contents: “Sending Underwear to Prison,” “In Which I Imagine George Washington Considering His False Teeth,” “On the Way to Chevron, My Father Tries to Save My Life.”

Most of the poems here are a page or shorter, but their intensity makes this a book to pick up, put down, pick up again. My favorites are the poems that find resolution, the way the God in these poems “gathers our shards/every splintered/fragment into His boundless hands.” A good example is “Prayer,” toward the end of the book, which starts:

When age sidles up,
a final suitor,
let me turn
and take it
without faltering,
the way my body
opens joyfully
to a man.
and ends:
I want to see
my breasts deflate
like sacks
my lover’s hands
have emptied
and laugh
as even laughter
ruins me, crumpling
the surface of my face.