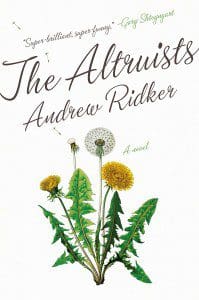 Andrew Ridker’s first novel, The Altruists (308 pages; Viking), follows a middle-class family, the Alters, as they struggle with the impact of unexpected wealth. Ridker is merciless in skewering each member of the family, and nearly every aspect of modern culture, from campus identity politics and the queer dating scene to poorly planned foreign aid missions. The novel’s wickedly dark sense of humor combines with a complex plot to create a compelling debut.

The story centers around Arthur Alter, a rapidly aging, untenured professor at a middling St. Louis university who is close to defaulting on the mortgage for his family’s home. Desperate, he invites his two estranged adult children, Ethan and Maggie, to visit even though they haven’t spoken since their mother, Francine, died of breast cancer two years prior. The day before Francine’s diagnosis, Arthur initiated an affair with a much younger colleague, causing his wife to write him out of her will and instead leave the entirety of a mysteriously-acquired fortune to their children. Arthur naively hopes that, upon reconciliation, his children will gladly pay off his mortgage and save their childhood home, but he fails to anticipate the depth of their resentment or their troubled relationship with their newfound wealth.

Ethan and Maggie’s treatments of their inheritance reflect their naturally opposed personalities. Idealistic, ineffective Maggie has convinced herself she is going to “renounce” the money and donate it to charity, although two years after receiving it she has still failed to do so. She instead chooses to leave it untouched and live a life of relative poverty, performing odd jobs in her neighborhood while restricting her eating habits out of grief. Ethan, on the other hand, is deep in debt and has frittered his portion away on apartment renovations, expensive housewares, and a variety of delivery services. Due to his excessive spending, he has gained the freedom to become a recluse in his Brooklyn apartment, rarely leaving for any reason.


Arthur’s invitation provides the stimulus both need to make meaningful changes in their stalled lives, but also forces them to grapple with the question of what it actually means to live a “good” life and how to be recognized as doing just that.

In one particularly telling passage, Arthur listens in as his children argue over his character and decide his future:

“See, this is the thing. You always let him off the hook so easily. Like he’s a child who doesn’t know better. He’s a grown man, Ethan. More than that. He’s an anachronism.”
“I’ll grant you that he’s out of touch. But what’s he supposed to do with that? Don’t we have a responsibility to him? To see that he makes it out of this okay?”
“I don’t.”
“You do. We both do.”
…Arthur stood in the doorway. He knew he should back away but he couldn’t. His heart leapt anxiously with every eavesdropped word. He stood there as the minutes piled up, listening, with defensiveness and hurt—and no small sense of self-importance—as his children debated his legacy.

It is this idea of creating a meaningful legacy that preoccupies each member of the Alters. Although they purport to be altruists, they are blocked from acting in a truly selfless manner by their desire to be perceived as good by others. Ridker ultimately suggests that for them to overcome this deep-rooted limitation they (and by extension, us) must renounce any grandiose ideas of the self. What constitutes the “good” life could be just living simply and, perhaps most difficult of all, forgiving those who do not deserve forgiveness.