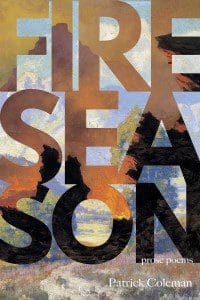 We poets often pride ourselves on exploiting the many interpretations that figurative language affords us, and so we may shy away from visuals for fear they will detract from this ability to embody multiple meanings without sacrificing substance that we think separates “real” poetry from most prose. And though we may write poems inspired by visual art, we rarely include images of these works in books. Not so with Patrick Coleman’s Fire Season (102 pages; Tupelo Press).

Initially, I expected the images paired with poems in the book to be too on the nose and/or to give away too much. However, the pairings—which include artwork by sculptor Alexander Archipenko and painters Guo Hui, Jules Tavernier, Agnes Pelton, Oskar Fischinger, and Diego Rivera—make sense. Firstly, the book seems to be something of an homage to Coleman’s first daughter’s early years, a time in which she would likely have been less than enamored of a book with no pictures. Secondly, I came to appreciate the insights the visuals gave me into the identity of the speaker behind each of these prose poems.

Coleman, who was an art curator at the San Diego Museum of Art, provides the reader with a gallery built around his poems, yet the experience of reading his book is as homey and welcoming as flipping through a family album. There are some diversions into work life that seem superfluous—in the poems “Being Lost” and “Arse Poetica”—but, for the most part, Fire Season offers intimate, lovely glimpses into new parenthood. In “Leda and . . .,” for example, we see the narrator navigating the busyness of parenting while coping with a mistake that puts a minor strain on his marriage—an accident in which a sculpture that has sentimental value to his wife is broken. Coleman writes:

Lines later, we get this gorgeous, tumbling imagery:

. . . . Love is dropping into an abyss edged with
a hundred jutting branches and choosing instead to hold the
circle of daylight above, the image that grows smaller and
smaller as you fall: moon, dime, bead, star, pinprick, memory.

In other poems, we experience something of how a new parent falls in love with their child. Much of this happens as Coleman captures the idiosyncrasies of his daughter’s toddler-speak. In “Developmental Grammar/Equivalents,” he writes:

While brushing your teeth, you waved the brush in the air
before you, saying, “I’m painting, I’m painting.” Making circles:
“It’s a house.” A smaller circle: “It’s a door.” Then with your fist:
“Knock knock knock.”

Coleman’s relationship with his daughter is enchanting. He draws us into that falling-in-love state where even his daughter’s naughtiness is endearing. In “Deaccessioning,” he writes:

. . . . My daughter
wearing only a shirt, crouched slightly and pissed on the ground.
She took pleasure in watching her own springing pool and how
quickly the heat reduced it to a darker patch of pink-stained
concrete—her shadow, she said, waving to it.

As this excerpt illustrates, much of the charm from these moments comes from seeing the world interpreted through the eyes of a child who seems at once wide-eyed and wise. Coleman wrestles with this in a number of other poems, including “On Ice,” in which he compares his child’s perspective—her ability to “make a tile floor into a skating rink”—to his own, particularly his mind’s insistence on the literal (that a rock is a rock is a rock).

Although the book’s cohesion rests mostly on the subject matter—parenthood, the anxieties of a father helping to raise a young daughter in a dangerous terrain, and the terrain itself—Coleman also ties the poems thematically by giving many of them the same titles. We get some metacommentary that gives us a sense of Coleman’s thoughtfulness as a writer when, in the final and title poem, the speaker revisits an “error” he made in the book’s first poem, which shares the same title. There are also the “Developmental Grammar” poems, in which we get to read and parse the young daughter’s child-speak; the “Equivalents” poems, in which Coleman calls into question what is real versus what is fake through language that often enacts mirroring; and others. These poems are spread across the book so that one is initially surprised at encountering pieces with the same titles but then comes to expect it and begins to wonder what they have in common and what functions they serve wherever each of them is placed. This makes for a nice game, kind of like piecing together a puzzle.

Years from now, I am fairly certain Coleman’s daughter will appreciate Fire Season just as any reader might—both subjectively, as a labor of love, and objectively, as a solid body of work. It addresses timeless themes, and the visual art contained in it spans centuries and civilizations. There is intergenerational wisdom in this book.