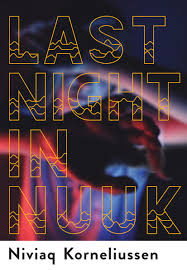 Niviaq Korneliussen’s first novel, Last Night in Nuuk (288 pages; Grove Press), is first and foremost a character study. (In an immediate indicator that the book is primarily driven by its multiple protagonists, it opens with a literal “Cast of Characters.”) Korneliussen, who is from Greenland, explores in distinct sections the perspectives of five different people and in the process shows us what it means to be young and queer in her homeland. The characters are all handled tenderly and with obvious care, and each stream of consciousness narrative can stand alone but fit neatly into this larger work.

Living in Greenland’s largest city, the capital of Nuuk (population 17,000), Korneliussen’s characters run into each other by chance and by design throughout their tiny remote community, ratcheting tensions while simulatenously creating a sense of crushing isolation and stifling familiarity.

Among the protagonists, young journalist Inuk struggles the most with the unavoidable intimacy of Nuuk. After his affair with a male politician is pubicly exposed, he flees to nearby Denmark, where he attempts to come to terms with both his sister Fia’s sexuality and his own. Inuk frequently laments the fact that everyone knows everyone in Nuuk, and even compares the iconic Greenlandic mountains to prison walls. In one of the most compelling passages of the novel, he defines what he feels it means to be a Greenlander:

Over the course of his chapter, Inuk’s definition of the Greenlandic identity expands and changes significantly, perhaps serving as the most explicit representation of the conflicted feelings of the rest of the main characters—student Fia, journalist Arnaq, and partners Ivik and Sara—toward their country as it grapples with rampant addiction and abuse.

Perhaps the strongest section of Last Night in Nuuk centers around butch lesbian Ivik as she grapples with her relationships to Sara and Arnaq, with whom she begins an affair, as well as her gender identity. The latter conflict in particular is handled well, and is hinted at early on. (“Ivik” is most commonly a name given to men in her culture.)

For a book so focused on character, it is somewhat disappointing that the protagonists’ voices can blur together at times, with Inuk’s being the exception. Thankfully, the propulsive nature of each individual’s narrative—urgent, tense, and full of intentional rough edges that allow emotions to shine through—largely compensates for this. With Last Night in Nuuk, Korneliussen has crafted a convincing, nuanced depiction of what it feels like to be young and out of control while allowing us to inhabit a world that has been infrequently, if ever, presented to American readers.