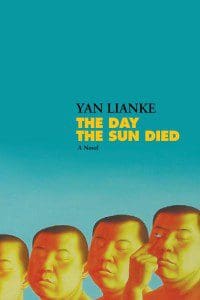 an Lianke’s latest novel, The Day the Sun Died (342 pages; Grove Press; translated by Carlos Rojas), manages to strike a balance between humor and horror as the world crumbles over the course of one very long night in Gaotian Village, China. The story is told from the perspective of fourteen-year-old Li Niannian, whose parents own the village funerary shop, and opens with a somewhat chaotic preface in which Li Niannian calls out to the spirit world, asking them to listen as he recounts the night’s bizarre events.

On this night of the great somnambulism, the people of the village and its surrounding region slowly begin to “dreamwalk,” carrying out actions and desires in their sleep that they might otherwise suppress or be consumed by in their waking state. A villager harvests wheat in the fields for fear of the fast-approaching flood season. A man kills another man for sleeping with his wife. Others jump into the river to go swimming and drown. In the midst of the chaos, stores and homes are looted.


Lianke’s prose, partnered with Rojas’ translation, makes a convincing and trustworthy narrator out of Li Niannian, clearly portraying his childlike curiosity and nervous demeanor through an artless vocabulary and blunt inner monologue. Interwoven with occurrences of the great somnambulism is a brief history of Li Niannian’s father, Li Tianbao, and of a relationship that complicates the story, one between Li Tianbao’s funerary shop and his brother-in-law’s crematorium. The story takes place just a few years after the Chinese government has made cremation mandatory in order to preserve farmland. Burial is a traditional and sacred practice, and so Li Niannian’s uncle is hated by many—especially by those whose secretly-buried relatives were disinterred and cremated—and Li Tianbao has secrets of his own to keep on the matter.

The Day the Sun Died peaks when dreamwalkers decide to fight a town battle to restore the Ming Dynasty and Taiping Heavenly Kingdom of centuries ago. The novel uses factual historical anchors (like the Ming Dynasty and the policy on cremation and disinterring bodies) to raise critical questions about China’s clashing traditional and “modern” practices, enforced by rigid familial and state structures, respectively. Just as most of the dreamwalkers insist they are awake, China is dreamwalking, too, Lianke seems to suggest, though it believes itself to be awake—going so far as to outright deny chaos to preserve social order. Li Niannian recalls that there were 539 deaths that night, but finds the official statement reads differently:

In Zhaonan County’s Gaotian Town, there were false rumors about large swaths of dreamwalking-related deaths and social disturbances, and in order to put a stop to these rumors and promote a stable social order, the government sent in a large number of national cadres and public security officers to conduct an investigation and also help the masses to regain a good and productive social order.

Notably, Lianke includes himself as a village person and key character in The Day the Sun Died. Li Niannian knows him as Uncle Lianke, the author neighbor who loans him books from time to time. In this way, The Day the Sun Died makes direct reference to some of Lianke’s most famous works, and follows him through a bout of writer’s block that snatches all meaning from his life. Ultimately, it is while in his dreamwalking state that Yan Lianke’s character finds his inspiration to write again––to write this very story, it seems.