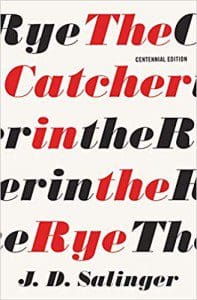 “If you really want to hear about it…”

1. He’s not really talking to you, it’s a ruse. Nor is he someone you want to chat with on the phone. Trust me on this. But don’t let it hurt your feelings. Like most of us, he’s talking to himself. It’s performance art, a term that contains its own contradiction.

He (or his characters, whichever you prefer) is trying very hard not to go crazy.

Holden Caulfield: “I kept walking and walking up Fifth Avenue, without any tie on or anything. Then all of a sudden, something very spooky started happening. Every time I came to the end of a block and stepped off the goddamn curb, I had this feeling that I’d never get to the other side of the street. I thought I’d just go down, down, down and nobody’d ever see me again. Boy, did it scare me. You can’t imagine. I started sweating like a bastard—my whole shirt and underwear and everything. Then I started doing something else. Every time I’d get to the end of the block I’d make believe I was talking to my brother Allie. I’d say to him, ‘Allie, don’t let me disappear. Allie, don’t let me disappear. Allie, don’t let me disappear. Please, Allie.’ And then, when I’d reach the other side of the street without disappearing, I’d thank him. Then it would start all over again as soon as I got to the next corner.’’

Seymour Glass: “If you want to look at my feet, say so…But don’t be a God-damned sneak about it.’’

Teddy: “After I go out this door, I may only exist in the minds of all my acquaintances. I may be a banana peel.”

Don’t get me started on Zooey Glass. He’s actually the most grounded of the group, notwithstanding that bit about having a glass of ginger ale in the kitchen with Jesus when he was eight years old.


Maybe “crazy’’ is the wrong world. It’s actually a search for satori, but these various fictional hothouse flowers each seem to be looking for a way to survive with all his (or her) f–a-c-u-l-t-i-e-s intact. 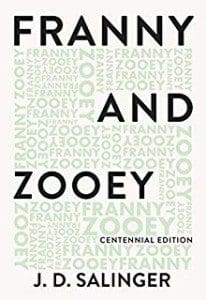 2. The preppie thing: Can someone really be a preppie if he keeps getting thrown out of school? Okay, Holden thinks it’s hard to be roommates with someone “if your suitcases are much better than theirs.’’ But even this bit of presumed snobbery is qualified: “You think if they’re intelligent and all, the other person, and have a good sense of humor, that they don’t give a damn whose suitcases are better, but they do. They really do.’’ Here, he’s no different than, say, Fitzgerald or O’Hara noticing class differences, though expressing with “a Good Ear for the Rhythms and Cadences of Colloquial Speech’’ as Seymour, satirically, characterizes his brother Buddy Glass’ prose.

The same counter-argument applies to those who were force-fed “Catcher’’ in high school—something the new Congress should immediately render illegal—and thus conclude (repeatedly) that he was just a whiner. What exactly do people expect here, Studs Lonigan? Still, put this one on the curriculum pooh-bahs, not the stunned students.

3. He writes mainly about white people. True. Draw your own conclusions, but he was a product of his time, upbringing and surroundings, for better or worse.

4. There are self-indulgent spots, clearly.

No one wants to hear J.D. go off on “the middle-aged hot-rodders who insist on zooming us to the moon, the Dharma Bums, the makers of cigarette lighter for thinking men, the Beat and the Sloppy and the Petulant, the chosen cultists, all the lofty experts who know so well what we should and shouldn’t do with our poor little sex organs, all the bearded, proud unlettered young men and unskilled guitarists and Zen-killers and incorporated aesthetic Teddy boys who look down their thoroughly unenlightened noses at this splendid planet where (please don’t shut me up*) Kilroy, Christ and Shakespeare all stopped—before we join these others, I privately say to you, old friend (unto you, really, I’m afraid), please accept from me this unpretentious bouquet of very early-blooming parentheses: (((( )))).”

The bit about the poor little sex organs is a bit much, as is the closing invocation against pretension. Ah, Jerome…

5. But finally, there’s the specificity, which no one of his time (or since?) has quite matched:

“My lips were quivering slightly, like two fools.”—Raise High The Roof Beam, Carpenters 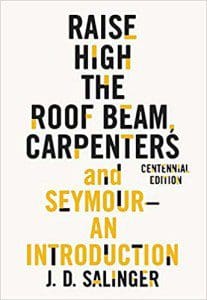 Bessie’s medicine chest: “The shelves bore iodine, Mercurochrome, vitamin capsules, dental floss, aspirin, Anacin, Bufferin, Argyrol, Musterole, Ex-Lax, Milk of Magnesia, Sal Hepatica, Aspergum, two Gillette razors, one Schick Injector razor, two tubes of shaving cream, a bent and somewhat torn snapshot of a fat black-and-white cat asleep on a porch railing, three combs, two hairbrushes, a bottle of Wildroot hair ointment, a bottle of Fitch Dandruff Remover, a small unlabeled bottle of glycerine suppositories, Vick’s Nose Drops, Vicks VapoRub, six bars of castile soap, the stubs of three tickets to a 1946 musical comedy (‘Call Me Mister’), a tube of depilatory cream, a box of Kleenex, two seashells, an assortment of used-looking emery boards, two jars of cleansing cream, three pairs of scissors, a nail file, an unclouded blue marble (known to marble shooters, at least in the twenties, as a ‘purey’), a cream for contracting enlarged pores, a pair of tweezers, the strapless chassis of a girl’s or woman’s gold wristwatch, a box of bicarbonate of soda, a girl’s boarding school ring with a chipped onyx stone, a bottle of Stopette—and, inconceivably or no, quite a bit more.”

Bessie, again, in contrapuntal rhythm with her son: “‘I just don’t know what happened to all you children,’ Mrs. Glass said vaguely, without turning around. She stopped at one of the towel bars and straightened a washcloth. ‘In the old radio days, when you were little and all, you used to be so—smart and happy and—just lovely. Morning, noon, and night. I don’t know what good it is to know so much and be smart as whips and all if it doesn’t make you happy.’ Her back was to Zooey as she moved again towards the door. ‘At least,’ she said, ‘you all used to be so sweet and loving to each other it was a joy to see.’ She opened the door, shaking her head. ‘Just a joy,’ she said firmly, and closed the door behind her.

“Zooey, looking over at the closed door, inhaled deeply and exhaled slowly. ‘Some exit lines you give yourself buddy!’ he called after her—but only when he must have been sure that his voice wouldn’t really reach her down the hall.’’’ 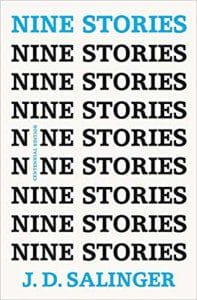 The British critic Martin Green has noted that the Glass’ family apartment is no less emotionally luxuriant than the world of Anna Karenina. (It should quickly be added that it bears little resemblances to the kitschy tropes of Wes Anderson. As Picasso said of Matisse: “First you do something, then someone else does it pretty.’’) Notwithstanding the common, and unhelpful, conflation of the artist’s life with his work, Janet Malcolm’s observation remains true: “The pettiness, vulgarity, banality that few of us are free from, and thus can tolerate in others, are like ragweed for Salinger’s helplessly uncontaminated heroes and heroines.”

As Holden Caulfield watches his sister Phoebe ride on the Central Park carrousel, he forcibly wills himself into non-intervention: “The thing with kids is, if they want to grab for the gold ring, you have to let them do it, and not say anything. If they fall off, they fall off, but it’s bad to say anything.”

Holden really doesn’t believe it—at heart he’s a Jewish mother, trying to protect everyone and everything—but Phoebe shames him into a semblance of adulthood, by threatening to run away with him, her suitcase is packed if he continues his odd rebellion. Catch-22.

If he were alive now, J.D. Salinger would be one hundred, inconceivably.

January 1st marked the centennial of his birth; he died on January 27th, 2010. He had long stopped publishing – whether or not he continued to write is hotly disputed – but Little Brown has marked the occasion with a boxed hardcover set of The Catcher in the Rye, Nine Stories, Franny and Zooey and Raise High The Roofbeams, Carpenters and Seymour – An Introduction. He once referred to Kafka, Kierkegaard, and the like as the “Sick Men” of literature, artist-seers who died not of “Consumption or Loneliness or Suicide’’ but from the “blinding shapes and colors’’ of their own artistic scruples. Hard to conceive, and perhaps ill-advised as a credo, still harder to contain within the shelves of a $100 set of his works. But there it is.

Raise high the roofbeams, carpenters. Like Ares comes the bridegroom, taller far than a tall man. One hardly bears imagine what the new dawn may bring.