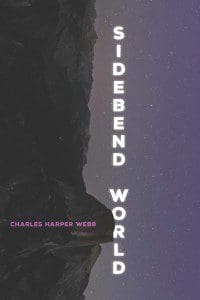 Charles Harper Webb’s Sidebend World (78 pages; University of Pittsburgh Press) contains some genuinely lovely and worthwhile poems. At his best, Webb is funny and self-effacingly honest, delivering poems that are intimate and warm. Unfortunately, other poems in the book often border on careless—that is, they rely on weak associations or seem half-halfheartedly crafted. Worse, however, some poems contain stereotypical portrayals of others and humor that some will likely find offensive.

First, let’s consider the positive aspects of Sidebend World. My favorite poem in the book, “Turtle Hunt,” is one that I could return to time and time again. The rhymes are both obvious and hidden. And the poem is interspersed with formal meter in lines like:

But at the bayou—where dragonflies, metallic red
and blue, snap up mosquitoes over tea-stained
water full of tadpoles, crayfish, punkinseeds—
Teddy flops into a snarl of thorny weeds,
and being 5, runs home crying. Carol, afraid

It’s a lovely, thoughtful poem with universal appeal and a satisfying conclusion. This is the kind of work that stays with a reader.

“Nice People Aren’t So Bad,” another of Webb’s poems that I admire, contains some of the same formal elements as “Turtle Hunt.” The stanzas are tight and follow a fairly strict syllabic count, which, along with the subtle rhymes, carries the rhythm of the poem. More importantly, the poem feels intimate, focused, and genuine. The reader believes these are people the speaker knows and things that actually happened to him. Here are some lines that I think convey the essence of the poem:

In a four-man lifeboat, they’ll let a fifth
climb in and share their food: extremely
stupid, unless the fifth is you.

Nice people don’t call the sky punch-
in-the-eye blue. They won’t so much as kiss
if either one is married to someone else,
though they may say, “I really like you,”
in a cherry-blossom shower, then rush
away . . .

Aside from the “cherry-blossom shower,” this poem is as grounded in reality as Marge Piercy’s “To be of use” and is told in as relatable a voice. Other standouts in Sidebend World include “Have I Got a Script for You” and “Nice Hat.”


But some poems in Webb’s book are not as carefully crafted. For example, “You Don’t Want to Meet the Ai-Uru” seems like it should be a contrapuntal poem, but its two halves do not read well vertically or as separate, standalone units.

In other poems, Webb inserts information that seems random and, therefore, detracts from the strengths of the work. For example, the strong ending of “A Far Cry from Eli Whitney” is thrown off by a beginning in which the speaker takes the opportunity to get in a shot at a former friend who sued him after the friend’s daughter recklessly jumped off the speaker’s stairs and, predictably, injured herself. This nearly random factoid distracts the reader from the poem’s true concern, which I believe is the parallel drawn in its second half between the speaker and his father and their shared inability to attain their highest aspirations. As with many of Webb’s other poems, a tenuous connection can be inferred between what the reader perceives to be unnecessary information and the rest of the poem (perhaps the speaker is comparing his livelihood or ability to provide for his family to that of his former lawyer friend?), but, again, this seems like a forced layer of nuance. The loss of a friendship might have been better suited to a separate poem.

Loose associations are a recurring issue in Sidebend World. “Bouncing the Porpis” is built entirely on weak associations:

Sometimes, after a dream-fall, I bounce
awake, happy and safe . . .

Miles out of Westport, swells bounced our boat . . .

At Kiddieland, Dad would set me on a horse,
sprint ahead to wave as I bounced by . . .

so people give him shoes to shine,
so who can blame him if he wants to crack their heads?

To be clear, I don’t find this offensive. Rather, it’s the moves that the speaker is making here that rankle me. Without the on-the-nose joke about Dr. Black’s name, we can’t arrive at the more interesting joke. In short, the quality of the poem is sacrificed for the sake of humor.

Further on in the poem, the speaker makes an off-color joke about a woman being seduced by his command of rhetoric—as in, composition—asking, “’Could good points, but support with examples,/be psychic rape?” This comes across as a bit tone deaf and dismissive of what rape actually is.

The occasionally offensive humor doesn’t stop there. In “Custer’s Last Handstand,” the narrator imagines, to the point of absurdity, the famed general’s last battle. I could accept this comical historical revisionism were it not for the following:

He walked on his hands, too,
feet dangling like a scorpion’s tail

over his head while Indian scouts,
bronze faces breaking into grins,
screeched war cries and pranced
like savages. . . .

It’s possible that the poem rests on the concept of inversion—that Custard performing a handstand should signal to the reader that he is, and therefore we are, seeing things upside down. However, the only parts of the poem for which this seems plausible are those in which our attention is drawn to the notion of inversion—that is, the on-its-face offensive use of the word “savages” and the ending (which is actually very good).

Even if this was Webb’s intention, I try to imagine being receptive to the use of this term to describe another marginalized group—take, for example, Africans (many of whom, like me, belong to tribes)—and, from that perspective, I continue to find “savages” problematic. It could be argued that the narrator is writing from a historical perspective and so may use language particular to that time period. However, the voice is modern and the poem is boldly revisionist. It is only when it comes to the narrator’s perception of indigenous people that there seems to be a lack of imagination and care.

Other poems are less blatantly problematic. In “Hero Food,” Webb takes an oddly spiteful jab at football players. He writes:

. . . like a football that spirals
ninety yards into the hands of a steroid-
puffed, illiterate multi-millionaire . . .

Perhaps Webb is referring to a specific football player. Given that he does not make this clear, however, I read this as a generalized insult to NFL players, nearly seventy percent of whom are black (according to a 2017 report from The Institute for Diversity and Ethics in Sport).

In sum, Sidebend World has truly good poems that deserve to be read and widely shared, and, on the whole, there are more decent than problematic poems in the book. Despite this, it may be hard to overlook the collection’s negative aspects.