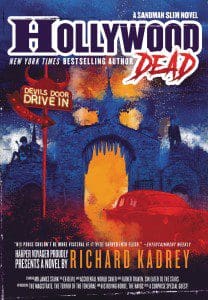 Hollywood Dead (354 pages; Harper Voyager) is the tenth novel in Richard Kadrey’s bestselling urban fantasy/noir series featuring the half-human, half-angel James Stark, AKA Sandman Slim. Stark has made a career of fighting supernatural threats; first as a monster slayer in the gladiatorial arenas of Hell, and later against rebel angels, demons, and magicians willing to sell their souls in exchange for power. For a time, he even occupied the position of Lucifer himself. Stark is blunt, crude, and can heal from any injury, but this time around he might just stay dead.

In Hollywood Dead, Stark has been resurrected by a necromancer who works for a secret society of magicians called Wormwood, a group hellbent on—you guessed it—world domination. But before their plan can work, they need Stark to dispatch a splinter cell of their organization. There’s only one catch: Stark’s dead body is, well, lifeless. His healing powers are stunted, but if he can fight decomposition long enough to stop Wormwood’s rogue element, the magicians promise to restore him to life––real life. As Stark explains, “When you’re Hollywood dead, you can die a hundred times and still come back for the sequel.”

With a new, but extremely short, lease on life, Stark travels throughout Los Angeles, tracking the Wormwood defectors. He navigates the city’s dangerous supernatural underworld with his trademark cynical wit and magic spells referred to as “Hellion hoodoo.”


Kadrey’s world building is just as impressive here as in previous installments. Readers will enjoy returning to Stark’s favorite haunts: the punk tiki bar Bamboo House of Dolls, as well as Max Overdrive Video, which stocks movies captured from other realities. And let’s not forget Donut Universe. “If I have to die again,” as Stark says, “let it be in Donut Universe. Bury me in old-fashioneds and éclairs. Burn me in the parking lot and let me drift up to Valhalla on a wave of holy sugar and grease fumes.” Stark still maintains a penchant for “sin tax” items from Hell—cigarettes called Maledictions, and the underworld’s finest vintage, Aqua Reqia. These touches of detail gently enhance the novel’s mood, which balances seriousness with Kadrey’s brand of absurdity.

Hollywood Dead also presents a more reflective James Stark. His friends have moved on, and his former lover, Candy, is happy with a steady girlfriend, while Stark is painfully aware his presence could be a greater source of harm than celebration for those he once knew. He’s emotionally vulnerable, and as he fights rigor mortis, Stark is forced to rely on others—and duct tape—to stay alive long enough to save Los Angeles. He lives in a morally gray area, yet senses a cosmic responsibility. Is he human or an angel, hero or villain? Or can he be all of them at the same time?

Kadrey engages these questions with his trademark funny dialogue and ultra violence. Hollywood Dead reads like a grindhouse film on the page, and delivers exactly what the movie-poster themed book cover promises. (As Stark himself states, “In my bloody suit, I look like the maître d’ at a Texas Chainsaw cookout.”) Kadrey’s prose is fast, fun, and makes the novel’s pulpy concept shine.

New readers are missing out on nine great books if they start here, but relevant backstory is woven into the narrative without information dumps. Hollywood Dead is an entertaining read, and fans of the series will not be disappointed.