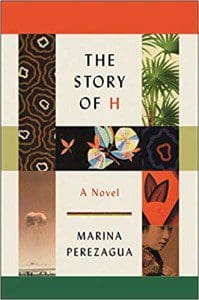 Marina Perezagua’s masterfully written novel The Story of H (281 pages; Ecco/HarperCollins: translated by Valerie Miles) follows the agonizing lifelong journey of an unlikely heroine, H, an intersex woman mutilated in the 1945 bombing of Hiroshima. The bombing is a paradoxical catalyst in H’s life, giving her the freedom to pursue the surgeries she needs to become anatomically a woman; but with this comes the loss of her family, home, and most important to her identity, her ability to conceive a child. H faces ostracization after the bombing and her transition, and leaves Japan to travel the world in search of love, family, and an understanding of the atrocities experienced by survivors like herself.

When she moves to New York City, H meets the love of her life, Jim, a former prisoner of war. Over the course of their partnership she becomes obsessed with helping Jim reunite with his long lost Yoro, a Japanese girl who was left in his care and whom he loves like a daughter. The search takes them across the world, spans decades, and eventually drives H to commit murder. As she relays her life to readers and the police, H experiences the phenomenon of psychological pregnancy, which she occasionally acknowledges as a manifestation of her impossible wish to become a mother and her all encompassing love for Yoro and Jim.


Perezagua’s novel, which was published in Spanish in 2015 as Yoro, tells not just H’s story but the stories of other victims of Hiroshima, as well as that of the slave laborers who built the Burmese Railroad and mined uranium in the Democratic Republic of the Congo, and the victims of the sexual abuse carried out by UN peacekeepers in the Congo so many years later. It is not written for the faint of heart. Perezagua disbars no details in elucidating readers to the terror experienced by people across continents and throughout history. The lesser-known traumas Perezagua revisits, in acknowledgement of the continued suffering caused by World War II, are repulsive, terrifying, but necessary the novel does not relish in these atrocities but rather uses them to demand culpability. In her note to the reader Perezagua describes most eloquently the importance of her work:

Just as pieces of broken pottery can be put back together by covering their cracks with a varnish of gold dust, so could I both in my day-by-day life and in what I write try to protect the historical and aesthetic value of scars. When I see a wound, I admire it because there, and not in our unbroken flesh, do I find the nature of being human: its vulnerability, but also the enormous energy that it requires to pick up our pieces from the ground, reunite them, and be born again.

While The Story of H reads as a confession of a murder it could more adequately be described as a fictitious memoir, peppered as it is with historical accounts, supplemental research, and anecdotes. Perezagua’s writing oscillates from pithy and fierce on one page—to swirlingly poetic the next. It is difficult to come up for air when reading the novel because H’s account is so unrelenting, her telling impassioned and coded, full of hidden meaning and etymology that necessitate a second read.

One of the most impressive examples of her mastery of craft is the way Perezagua fills H’s retelling of her journey with amusing narrative, balancing out the horrors we encounter. Also, H often will divertingly expound on an idea she has just happened upon, or a theory she is busy assembling. Her tangents range from painful revelations to fragmented bursts of clarity about herself and others:

If exorbitant hospital bills left me homeless, I don’t think I’d ever wash up, I’d waltz my stench around all the public places. That’s why I never cover my nose. Of course the smell bothers me, but it’s not offensive, and above all, it opens my sensory canals to a new perception: that smell, whomever it’s coming from, is always the same; it’s a democratic smell. When we’re clean, we all smell different. But when we’re piss-stained and sweaty, we all smell the same. I don’t like our common odor very much, but it nonetheless offers an unusual and mentally satisfying experience. There are things that do make me sick, like seeing some lady hold her nose ostentatiously over a stupid smell. So yes, no question, if I didn’t have a home and lived on the street, I would let layers and layers of stench accumulate too, just to make sure I couldn’t be confused with all those people clutching their noses while kissing any old ass necessary to make the money to buy the perfumes that camouflage their spite.

Reading Perezagua’s novel (and Valerie Miles hypnotic translation of it) means a traumatic re-visitation of the darker moments of human history, mirrored by H’s own pitfalls. Yet The Story of H is simultaneously a joyful and perceptive recollection of a long and complicated life. Perezagua set out to write a novel that explored the difficulties and triumphs of humanity, and in doing so she wote something equal parts disturbing, visceral, and enchanting.