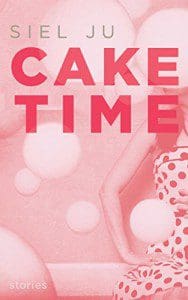 In 1985, Lorrie Moore announced her arrival on the literary scene with “How to be the Other Woman,” the provocative opening salvo that began her first story collection, Self-Help; she has since gone on to become one of the most revered voices in literary fiction. For writer Siel Ju (who appeared in ZYZZYVA No. 81) to start her novel-in-stories Cake Time (192 pages; Red Hen Press) with the similarly titled, and similarly told-in-second-person story “How Not to Have an Abortion” is a bold move, to say the least. Yet Siel Ju’s voice rings clear as her own, thanks in part to her specificity of detail (“The clinic accepts only money orders, so you stop at Bank of America for your eighty dollars, at Wells Fargo for his eighty dollars, then at Ralph’s, the busy one on Third and Vermont, to buy the money order”), and the uniqueness of her perspective—the story’s protagonist must contend with her stern Korean immigrant mother while trying to navigate the fast-paced, surface-obsessed landscape of ‘90s Los Angeles.

From there, Cake Time follows our unnamed narrator on her journey through young adulthood, relaying her various temp jobs and love affairs in a series of interconnected short stories. In the titular piece, the narrator and her college roommate Carrie persuade Carrie’s brother to drunkenly fornicate in front of them after a birthday party; in “Easy Target,” she hesitantly joins the dating website Match.com only to find herself paired with a callous womanizer who takes her to a swingers club. Yet most of the stories in Cake Time are hardly so risqué; instead, Ju focuses on the quiet disappointments and lingering sense of dissatisfaction that can follow us through our careers and relationships. She displays an uncanny knack for revealing the complex thought processes of her main character, depicting the way emotions often change from moment to moment when making love or peering into a partner’s eyes: “I got that tense, fraught feeling again, like I needed to act quickly, I needed to figure it out before I lost my chance for good…and for some reason that suddenly brought into focus the hilarious absurdity of our night, my life. For a second I had the urge to burst out laughing, though the feeling faded, and I didn’t.”


In this way, her novel-in-stories proves not unlike Mary Gaitskill early collections Bad Behavior or Because They Wanted To. Siel Ju is similarly candid and often unflattering in her portrayal of her female narrator’s psychology. Ju’s protagonist drifts from lover to lover—a sea of indistinguishably handsome young men with interchangeable, all-American-sounding names like Sam, Matt, Christian, and Jeff—without ever finding the elusive something she appears to be searching for. “‘Good luck,’ [Jeff] said. ‘With everything.’ I wished him the same. Then we let go, I gave him a little wave, and we went our separate ways, he to his car, I to mine.”

Through this tapestry of short stories, we watch as the narrator slowly ages before our eyes and characters reappear over the course of her life. In doing so, Ju displays how self-discovery is seldom about arriving at some grand epiphany, but rather interrogating how we feel in the moment. She expertly taps into the existential malaise of many thirty-something urban dwellers, who find themselves feeling strangely adrift despite their respectable careers and “fit, clean, and exact” apartments.

I thought about how nothing was fixed, that everything—songs, events—held only the meanings affixed to them,” the narrator muses after learning her closest friend will be leaving L.A. “I wondered if my mind had been perpetually stuck in one spot, dissolutely clinging to the uncertainty it was familiar with, adding that scrim to everything I saw. For a few seconds I saw myself as floating in a limpid, amniotic darkness that was comforting, but also keeping me in an ineffectual fetal state.

For Siel Ju’s narrator, there are no easy answers or tidy morals to unpack after a relationship fizzles—that’s just life. Cake Time concludes abruptly, leaving us without a concrete sense of where her character might be headed, no promise of a “Season 2” in which her existential doubts will be banished and the right choices revealed. We know she will be okay, if only because we know, most likely, we will be okay. Though it begins in the Nineties, Cake Time is a great story collection for our present moment; an exploration of love, morality, and contentment that proves such concepts can be as murky and uncertain as a wisp of cigarette smoke outside a chic bar.