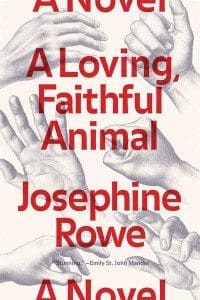 After the recent death of a beloved family pet, I was looking forward to reading something sweet and poignant. A Loving, Faithful Animal (Catapult; 176 pages) by Josephine Rowe promptly disabused me of any such hope. The titular loving, faithful animal is ripped to shreds in the first few pages.

Rowe’s book, set in a small town in Australia, radiates with a sense of danger, but not in the expected ways; it’s not concerned with being wickedly subversive or delivering an emotional sucker-punch. It’s a family story, narrated in several parts by five family members. The premise is simple: an abusive father leaves his family, perhaps for good. The ecosystem of domestic abuse it reveals is not unfamiliar—Father is haunted by the Vietnam War (about 60,000 Australians served in that conflict), and beats his wife, who beats on her daughter Lani, who in turn manipulates and harasses her sister, Ru. The eccentric Uncle Tetch maintains a benovelent existence in the background, fixing bikes and radios and attempting to protect the women of the house from his brother. Ru, whose second-person narration bookends the novel, wonders about the universality of her family’s strife: Are all family scripts so interchangeable?


The sense of danger comes from the way Rowe, a former Stegner Fellow now living in Tasmania, weaves this family’s ecosystem into the wider southeast Australian wilderness, lending the story a feeling of urgency and rawness. Every time you settle into the familiar narrative of suburban linoleum depression, a spider the size of a hand crawls across the ceiling. In this book characters can’t go for a walk without crunching cicada husks beneath their shoes, pass a fence without seeing a strung-up fox (both a trophy and a warning), or hear gunshots without wondering if someone finally got the giant black cat that’s been stalking the area.

Rowe doesn’t use quotation marks, so dialogue blends into characters’ thoughts and descriptions of the environment. This stylistic choice, rather than muting the dialogue, turns the ambient volume up: the crunches, crackles, and gunshots. What people say and think in Rowe’s book is punctuated by the sharp sounds of the parched world around them, a world just waiting to burst into bushfire. Speech is similarly sharp: the family speaks in short phrases laden with Australian twang. Skinny as a whippet–you could put your hands like this around my waist–and just that fast. Tenderness emerges amid the harshness of their dialogue. The mother, cooing to a pair of angora rabbits as she tries to gently comb tangles and burrs out of their hair: I should just shave the two of you. I should knit jumpers out of you little dolts. That’d be something.

A Loving, Faithful Animal is the story of a family trying to rediscover their identity after the abusive presence they once molded themselves around has disappeared. Rowe depicts her characters searching in the wake of their former selves for the moments, objects, and places they can use to construct their new identities. Rowe’s way of emphasizing the landscape to express her characters’ inner worlds proves both contemplative and thrilling.