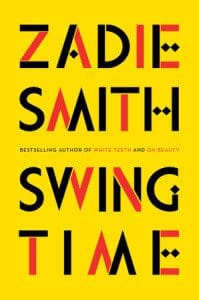 If it weren’t for the prologue in Zadie Smith’s new novel, Swing Time (464 pages; Penguin Press), a reader might be confounded by the many undulations the narrative takes as it kicks off in the present then looks back upon a past traumatic incident, excavating it. What could have been off-putting proves to be an adventure zig-zagging from public housing to brownstones, from England to Senegal, from 1982 to 2008, filling in the gaps in time and place and creating a definitive arc, albeit one completely warped.

Relationships, and the action that subsequently alters them, form the novel’s backbone, cementing the nonlinear action nicely. When we meet Tracey in the book’s opening, she’s another mixed-race girl whom the unnamed narrator has dance class with. Their friendship and fated falling out is the stuff of tragedy in the classical sense; our narrator muses, “there was always this mutual awareness, an invisible band strung between us, connecting us and preventing us from straying too deeply into relations with others.” Tracey is, indeed, the narrator’s sole object of obsession, one she returns to at varying points, often by way of other characters, illustrating their karmic inseparability—a lodestar by which she tracks her own success or failure. Tracey is the more talented of the pair, but her talent quickly dissipates when she falls prey to the socioeconomic odds stacked against her, eventually railing to bring the narrator down with her.


Standing in stark opposition is the narrator’s mother, a radicalized feminist who spends more time reading highbrow academic texts and organizing grassroots campaigns for the marginalized than parenting. As a political figure, she is impactful, but as a mother, she is painfully ill equipped, “a woman plotting an escape” from her daughter and her familial duties. Her political extremes push her to the point of parody at times. She becomes a frequent call-in guest on left-leaning radio shows, but only if “the President of the Student Union, the editor of the New Left Review, and the spokesperson for the Anti-racist Alliance happened all to be busy.”

The narrator’s father is a curious study and given less treatment. We aren’t given many details beyond his complacency and sheer deference to his wife. We know he delivers the Royal Mail and reads the Communist Manifesto, but only to impress his wife, and in fact he “never [gets] any further than the first twenty pages.” As it happens, most of the men in the novel (like Tracey’s father, who has abandoned her family, returning only to cause mayhem) exist in orbit around these powerful female figures.

Then there’s Aimee, a white singer superstar who employs the narrator as a personal assistant. With her arrival, the story branches out to West Africa, where Aimee becomes preoccupied with humanitarian efforts to provide relief to local villages and eventually butts heads with the narrator when she pursues a foreign adoption. As that relationship spirals downward, the narrator forms budding friendships among village locals Lamin, Fern, and Hawa. They all offer her a sense of how she, a woman of color, is perceived outside of London. As Hawa puts it after seeing the narrator’s dance moves at a drum circle, “Even though you are a white girl, you dance like you are a black.”

Much of the novel’s tension arises from the narrator’s inability to form an identity outside of these three main women. Like her, we’re ultimately more interested in the three stronger women around her than in her own life. She’s essentially an observer, reacting to the movements of those around her. Like Nick Carraway in The Great Gatsby, her romantic interests and growth are often secondary to the story. Even Smith’s portrait of the narrator as she goes through her youthful rebellion (she becomes a Goth) and a bad college relationship seem obligatory rather than necessary.

Swing Time’s scope is large, and the novel teeters at times. But its mercurial nature mimics the messiness of life. We might not get a happy ending or clean precision, but by the end we do come to see portions of ourselves in many of its characters.