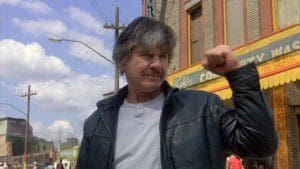 I am strongly drawn to Camp, and almost as strongly offended by it.
—Susan Sontag, from her essay “Notes on Camp'” (1964)

Charles Bronson steps away from the dinner table, a Norman Rockwell tableau of elderly friends, gravy boats, and stuffed cabbage. He folds his napkin and politely excuses himself. On the street below, he discovers two gang members removing the stereo from his Cadillac Seville, a vehicle he bought several scenes earlier for the express purpose of enticing criminals.

After a brief exchange with the thieves, one remarks, “We’re stealin’ the fuckin’ car, what’s it to you?” Bronson retorts, in a charmingly incompetent performance, “It’s… my car!” He extends his arms in a stilted (but sincere) manner, enunciating the syllables in a way that no actual human would. The thieves smirk at each other, deciding “Now you’re gonna die,” and one of them cartoonishly flicks open his switchblade. Bronson draws a gun and shoots the both of them before calmly returning to his cabbage.

This is a scene from Cannon Films’ Death Wish 3 (1985), and it’s worth mentioning that the criminal element therein is represented by a multiculti mishmash of Alvin Ailey dancers and Adam Ant lookalikes dressed in a riot of mismatched chains, studded gauntlets, outré face paint, assorted fetish-wear, and an entire rainbow’s worth of handkerchiefs. The film is set to a funky Jimmy Page soundscape, half-horror and half-honky-tonk in sensibility. While certain scenes seem to accurately depict the fantasy life of a would-be vigilante, the film is undermined at every turn by its own ineptitude and comic absurdity, seeming in the process to embody the evolvement of Reagan-era hysteria.

Films of this kind were my obsession for many years, from my days as a VHS-renting teenager and well into adulthood. Shameless Vietnam revisionism like Missing in Action (1984) and Rambo: First Blood Part II (1985); al fresco, Riefenstahl-esque body worship in Conan the Barbarian (1982) and Commando (1985); survivalist pipe dreams like Red Dawn (1984) and Invasion U.S.A. (1985)—they portrayed scenarios so alien from my way of thinking that they could only be read as pure kitsch, subverting any serious intent on behalf of the makers. At the end of the day, Death Wish 3 was about criminal justice to the extent that Labyrinth was about childcare. And yet, in 2016, on YouTube, the “It’s… my car!” scene is accompanied by a chorus of anonymous commenters with Pepe the Frog avatars, using it as justification for hate speech and racial violence. This faction is blind to the humorous ridiculousness of these films, apparently capable of watching a smorgasbord of bad taste and wild ’80s exuberance with the dead-eyed detachment of a crocodile sizing up its next meal.


It’s probably not worth waging war over the “soul” of Death Wish 3, though recently, I’ve been wondering: in celebrating its comic value, am I enabling the fascists, or am I emasculating them? If fascism were a religion, would their Bible even be discernible from camp?

If fascism is about control; if it celebrates the autocrat-decider as judge, jury, and executioner; if it labels thought as cowardly and action as heroic—then it would seem to be fundamentally at odds with the literary form. And yet I have also been fascinated (on a similar kitsch-level as I enjoy Death Wish 3 and the others) by arguably fascist work from popular American writers like Mickey Spillane and Robert Heinlein.

Spillane’s My Gun Is Quick (1950) actually begins by mocking the reader for reading it and not living it:

“When you sit at home comfortably folded up in a chair beside a fire, have you ever thought about what goes on outside there? Probably not. You pick up a book, reading about things and stuff, getting a vicarious kick from people and events that never happened. You’re doing it now, getting ready to fill in a normal life with the details of someone else’s experiences… But remember this: there are things happening out there. They go on every day and night making Roman holidays look like school picnics… All you have to do is look for them. But I wouldn’t if I were you because you won’t like what you find. Then again, I’m not you, and looking for those things is my job. ”

Spillane was deeply invested in ensuring his audience took his authoritarian daydreams at face value, because it was the basis of his public image. He was the maverick who wrote the books the publishing establishment was “too afraid” to publish. That he lacked Dashiell Hammett’s moral ambiguity and Raymond Chandler’s colorful wit was not a limiting factor, but a point of pride. Perhaps this is why he was as insecure about the fictitiousness of his fiction as Hemingway was about trying to live up to his various masculine personas.

Similarly didactic in its worldview, Heinlein’s The Puppet Masters (1951) depicts a nightmarish vision of communism (parasites from outer space) and proposes a nice, clean solution: smashing them. The closing lines of the novel are these:

“We are about to transship. I feel exhilarated. Puppet masters—the free men are coming to kill you!
“Death and Destruction!”

When I read those lines, I sat up in bed, shut the book, and smiled. It was so simple-minded and childlike in its barbarism that I had to laugh. It was weak sauce. The philosophical equivalent of a newborn kitten trying in vain to murder your foot. But in a world sensitive to popular perceptions, weak sauce can be perceived as strong—and its objective weakness quickly rendered meaningless.

At the opposite end of the spectrum, you may remember Paul Ryan was once obsessed with Rage Against the Machine, claiming in 2012 that they were his favorite band (and backpedaling the idea in 2014, when pressed). Perhaps he fundamentally misunderstood the message of the work, or perhaps he believed that listening to “Killing in the Name” while passing reactionary legislation would somehow rob the music of its power. In either case, I don’t think Rage Against the Machine is so easily deflated. I believe there is an essential difference in fascist and progressive texts, though I am not so naïve to suggest that lies will always land feebly, like dud grenades, while the truth will always strike home.

Throughout my ongoing fixation, I’ve found that the fascist’s shortcoming rests mainly in his desperation and insecurity. He is correct 100 percent of the time and is very worried that you’re going to forget it. In Death Wish 3, the geriatric Bronson overcomes an army of two-hundred gang members because his split-second judgment is always perfect, because every person he kills is objectively worthy of death, and because he really did end up needing every weapon he stockpiled, especially the mail-order bazooka. The absurdity of Spillane is amplified when he must keep clearing his throat, taking you out of the moment, and reminding you that he and his ideas are for real. The fascist’s idea of making a stand is to steal a glance over his shoulder and make sure his audience is still buying his charade. In this aspect, I believe there is value in pricking the balloon, in laughing at a thing that is baldly laughable. A dictator is more likely to be laid low by graffiti, a joke, a song, or a cartoon than by a firmly-worded essay, and I see a mischievous kind of value in turning authoritarian kitsch against itself.

If, for instance, I were to spend an evening with pizza, beer, and friends watching Chuck Norris in Delta Force 2 (1990)—ridiculing the heteronormative, jingoistic flounderings of a man who doesn’t seem to realize he’s surrounded on all sides by unintentional hilarity and abundant homoeroticism—it would certainly bear more resemblance to a frivolous act than a revolutionary one. But it’s a skeleton of popular myth that props up the delusional foundations of American fascism. And for me, it’s worth considering each bone sustaining the beast’s posture, even—and perhaps especially, given the astonishing lack of popular discernment—the most childish and superficial.

Sean Gill is a writer and underground filmmaker who has studied with Werner Herzog, played a rock star for Martin Scorsese, and won the 2016 Sonora Review Fiction Prize. His latest works may be found in McSweeney’s Internet Tendency, Word Riot, and So It Goes: The Literary Journal of the Kurt Vonnegut Memorial Library. If he didn’t live in New York, he’d live in San Francisco.