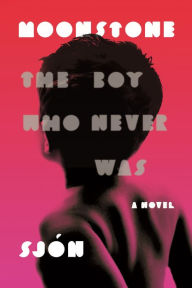 Sjon’s latest novel, Moonstone: The Boy Who Never Was (Farrar, Straus, and Giroux Books, 145 pages), set in Reykjavik in 1918, is the story of sixteen-year-old Máni Steinn (a.k.a. Moonstone). The boy’s guardian is “the old lady”—his grandmother’s sister who took him in after his mother died when he was just six. They live with “the landlord,” a man she raised as a nanny and who lets them stay in his garret space rent-free. To the concern of the old lady, Máni is “such a loner that rather than go out and play with his classmates he preferred to hang out at home, smoking cigarettes with her.” Besides smoking in the attic, he splits his time between trips to the cinema and prostituting himself.

Early on in the novel, we witness the eruption of Katla, a large Icelandic volcano. The ash coats Reykjavik’s skies, wrapping the city in a hazy cloud that’s reflective of the island country’s seclusion from the rest of the world, as well as Máni’s isolation. While Sjon does not dwell on the pain of being gay in a place where queerness may be unfathomable, the moments that we do get access to Máni’s inner torment cut deep. Much of the boy’s distress is shared through what he dreams; graphic and horrific nightmares that pull from his real-life troubles. He escapes his situation by going to the cinema. He watches every movie imported into Iceland, and each film as often as it is screened. “And now the boy lives in the movies. When not spooling them into himself through his eyes, he is replaying them in his mind.” The boy’s cinephile-like view of life is reflected in the way Sjon tells Máni’s story, often focusing on situations frame-by-frame, and cutting abruptly to other scenes.

Máni pays for all these movies by servicing “gentlemen,” some of whom are foreign (like the Danish sailors docking in the port or the wealthy tourists visiting from Copenhagen) and some of who are prominent townspeople, local men living in the closet. One of them is the scholar, Dr. Thordeal, who refers to himself as the Atlas of the Icelandic literary world. He exists as a hermit, hiding in his basement with his books. The boy sometimes performs sexual favors for this “genial hunchback” for two kronur. One of the many tragic elements of Máni’s situation is that discrete prostitution is the only outlet for him to express some semblance of queer love. A local poet, whom Máni does not charge for his services, whispers to him, “Had we but another world and time/ Our passionate embraces were no crime.”


The boy’s daily routine changes once the Spanish flu hits Reykjavik, and the city becomes a battleground at the same time World War One has come to a close (“in Reykjavik the cessation of hostilities was greeted with the same indifference of the cessation of the Katla eruption a few days before”). As Reykjavik’s residents try to survive the pandemic, Máni, one of the last healthy people left, joins the crusade against the disease. For the first time since he was twelve, he returns to his school campus, which is now “simultaneously orphanage and hospital, lunatic asylum and mortuary.” He forms an odd trio with a couple of other flu survivors, Dr. Garibaldi and Sola G-. Their mission is to drive around the city and find the bodies lying in all the houses. This is when the anguish of Máni’s existence worsens into something like a horror film, As Sjon writes, it’s now when “Reykjavik has, for the first time, assumed a form that reflects his inner life: a fact he would not confide to anyone.”

Their squad’s driver, Sola G-, gives the impression of a sixteen-year-old Lisbeth Salander, from her black boots to her feminism to even her motorcycle. (She is “called in and put behind the wheel, though she had no license: her skill at riding the red Indian was well known.”) Máni is mesmerized by her, in the same way he is mesmerized by films. He scrutinizes every detail about her appearance while she drives, down to the flecks of tobacco that get stuck to her tongue as she smokes. The boy’s fascination with Sola G- started long before their recovery missions, though. He initially becomes entranced when he sees her at The Vampire screening at the Old Cinema. “The instant her shadow fell on the screen they merged—she and the character in the film. She looked around and the beam of light projected Musidora’s features on her own.” Sola G- is also the only person besides the “gentlemen” who knows he’s queer.

Dr. Garibaldi, the local surgeon, is strictly business when it comes to their expeditions. He forbids all conversation when they are driving so he can concentrate on his notes. “…Dr. Garibaldi has long endeavored to persuade his countrymen of the dangers inherent in gawking at films.” He blames films for all different outlets of “immorality,” including homosexuality. That animosity plays out when, under Dr. Garibaldi’s orders, Máni and Sola G- fumigate the cinemas by dripping hydrochloric acid into calcium chloride, and race out of theaters as the vapor begins to rise. “The greenish-yellow gas that had lately felled young men on the battlefields of Europe now drifts and rolls through the picture houses of Reykjavik.”

The scenes where Sola G-, Dr. Garibaldi, and Máni are collecting the dead and dying are truly horrific. In one home, “they find the stiffened body of a man lying in the marital bed, and beside it a desperately ill woman with the corpse of an infant in the crook of each arm.” Amid the carnage, though, there is beauty. Máni has a bewitching mind, and the way Sjon portrays his protagonist’s view of the world is welcomingly unusual as well beautifully cinematic, even in the ugliest of moments. In Moonstone: The Boy Who Never Was, Sjon has created a compelling tension between a boy who you will want to understand and revisit and a place and time that will make you want to run in the other direction.