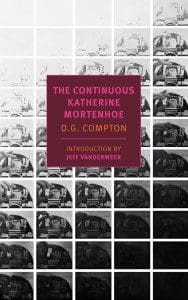 From Google Glass to drone warfare and genetic modification, it’s fair to say that our contemporary world bears more than a passing resemblance to the science-fiction novels of yesteryear. Originally published in 1974, English writer D.G. Compton’s The Continuous Katherine Mortenhoe, recently reprinted by New York Review Books Classics, is a vintage piece of speculative fiction that feels of the here and now, and startlingly so.

Mortenhoe opens on a society that could very well be our own in another fifteen years: a culture rife with economic disparity, where most diseases have been eradicated and the populace is sated by reality television programs that chronicle the lives of their subjects in unnerving detail. It’s an era when middle-class life resembles a “bland, painless, deathless advertiser’s dream.” Enter Katherine Mortenhoe, an average woman who finds herself unexpectedly stricken with a rare terminal illness. Her brain is literally shutting down from its inability to cope with the nonstop rush of sensory information that defines 21st century life.


The novelty of her encroaching death makes her the unwitting subject of “Human Destiny TV,” a popular show that aims to document every moment leading up to her passing, to be filmed by Roddie, a reporter whose eyes have been surgically implanted with a recording device. Now the jaded Roddie leads a sleepless existence as a one-man YouTube, shooting life around him so it can be edited and scored for television. He is, in his own words, “the world’s morbid curiosity made flesh.” Although he initially ingratiates himself to Katherine so he can record her without her consent, Roddie eventually comes to recognize the quiet dignity with which Katherine faces her impending demise. Sadly, their unlikely bond can do little to protect them from the powerful network that will stop at nothing to make good on their expensive investment in “The Man With the TV Eyes.”

Compton’s novel alternates between standard third-person narration and first-person passages told from Roddie’s point-of-view, the latter of which unfold with the hard-boiled cynicism of detective noir (“Some people are fascinated by chance decisions…Me they bore stiff”). However, the writing proves strongest when chronicling the moment-by-moment psychological minutia of Katherine Mortenhoe as she grapples with the knowledge that her brain is failing because it can no longer keep up with the speed of modern life—and the fact that the world thinks they deserve to witness this process simply because they can: “She was alone, and dying, and there was no one to know. No one who did not in some manner regard her as property, to be kept track of and cashed in when the time was right.”

Compton frequently punctuates his story with bursts of unexpected violence, as when one of Katherine’s media pursuers is involved in a horrific car wreck. It’s moments such as these when Compton reveals his flair for visceral details (“…his face was imprinted with crumbled lozenges of shatterproof glass”), as well as when he conveys the bleak atmosphere of this near future through descriptions of the “aluminum saucepan sky” or a mansion gaudily furnished with “amoebic mounds of translucent upholstery.”

Clashes between protestors and motorists on heavily trafficked roads; media conglomerates churning out a televised opiate for the masses; enclaves of the dispossessed living on the fringes of society: The Continuous Katherine Mortenhoe offers an only ever-so-slightly smudged reflection of 2016 as we know it. As such, Compton’s novel is an example of speculative fiction at its most prescient and insightful. The book disturbs at times, to be sure, but in the character of Katherine Mortenhoe, Compton delivers a potent strategy for navigating the technological minefield that surrounds us: treat our fellow man as ends rather than means, and in the process preserve, through the digital noise, “a tiny, triumphant something else.”