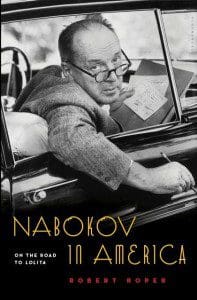 Speaking about what he refused to characterize as his personal fame, Nabokov once told an interviewer, “Lolita is famous, not I. I am an obscure, doubly obscure, novelist with an unpronounceable name.” However, in the face of what the author and his family called “Hurricane Lolita,” Nabokov remained personally obscure only because he was intent on doing so. Yet all the while the near mythical dimension of his persona grew around his unwillingness to appear in public, and because of his pithy, self-orchestrated, and tightly managed interviews, which tantalized but revealed little. Appearing in a candid television interview once (and refusing to do so thereafter), demanding that all interview questions be submitted to him beforehand, the intensely private Nabokov was able to keep a close hold on what an exceedingly curious public was able to know about him personally. He only commented elusively on his own work and made strong proclamations about the works of others. Thus it has been the job of biographers such as Brian Boyd—and now Robert Roper, with his Nabokov in America: On the Road to Lolita (354 pages; Bloomsbury)—to give Nabokov’s readership something closer to an honest, human portrait of the man behind works of genius such as Pale Fire and Lolita.


Roper’s biography, dealing solely with Nabokov’s time in America, expounds a unique and subtly argued thesis: that Nabokov did not simply write his best and most enduring work while in America, but was able to do so because of the effects the country had upon him. After being put through “the historical wringer,” first in his native Russia and later in the darkening and dangerous Europe on the precipice of the Second World War, Nabokov was eventually able to find safety and reasonably stable employment in the U.S. as a professor and lecturer.

However, Roper ascribes Nabokov’s eventual success not to this new sense of stability but to the invigoration he felt upon taking in the American landscape. Roper details the Nabokovs’ (Vladimir, his wife and literary confidant, Vera, and their son, Dimitri) many road trips across most of the U.S., where Nabokov obsessively hunted butterflies and gathered details for his forthcoming American novels. From this, Roper astutely notes that the America that emerges in Nabokov’s novels results from his having “looked around him and recognized a curious, half-asleep people—a perky populace with gloomy secrets, inhabiting a magnificent landscape that it tended to crap up, prone to stifling social norms best depicted via caustic comedy.”

Many of Nabokov’s ardent admirers have a tendency to view him as infallible, to argue for his vaulting greatness against any protestations. Roper lightly admonishes Nabokov scholars and former biographers for this, and goes out of his way to be critical of what he views as his various shortcomings, both within and outside of his fiction. Some of these criticisms strike one as more valid than others, such as Nabokov’s frequent and callous dismissal of other authors’ work. Others are less so, such as his professed disavowal of political themes. Roper sarcastically summarizes Nabokov’s position as “The world’s convictions that politics matter offended him—how stupid of the world.” This conclusion seems to disregard, at least, the wit with which Nabokov treats political matters as they scantly appear through his oeuvre, such as in Bend Sinister or in the following remark quoted by Roper from The Gift, which bitingly says more about the rise of World War II-era fascism than it initially seems to: “A truck went by with a load of young people returning from some civic orgy, waving something or other and shouting something or other.”

Given the great profusion of critical work about Nabokov, Roper keeps his exegesis of the author’s work to a minimum, and instead discusses Nabokov’s prolific contributions to lepidoptery, his many journeys across America, his prowess as a lecturer, and some of the important and influential social and literary associations he made in America. Roper’s reflections on Nabokov are carried out with a clarity and a directness often missing from the academicians’ spiraling and excessively involuted forays. His insights reveal a deep interest and engagement with Nabokov’s American corpus, which Roper ranks above Nabokov’s work written before and after. Despite these necessary and honest criticisms of the man and the writer, the portrait that emerges here is ultimately an affectionate one. Roper writes of Nabokov as he appears in an interview: “typecast as an aesthete, he peers repeatedly from behind the mask, wanting to make contact with whoever may be out there…every now and then a beautiful, boyish smile breaks out on his big face…it is the smile of someone never far from helpless laughter.” Finally, and most importantly, Roper recognizes Nabokov for his greatest and most enduring achievement, as the writer of “Maximum closeness; not the closeness of ostentatious empathy but the closeness of one mind addressing another in the most thrilling terms.”