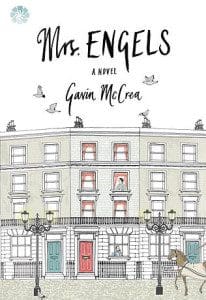 In his first novel, Gavin McCrea accesses the intricacies of Marx and Engel’s Communist revolution through the ordinary magic of fiction. Mrs. Engels (Catapult; 368 pages) explores the subtleties of a historic movement through the vantage of Lizzie Burns, Frederick Engels’ longtime companion and eventual wife. Lizzie, an illiterate Irish woman, is both an outsider and part of Frederick’s inner circle in London—at once the closest to the proletariat and the furthest from Marx and Engels’ ideals. Her position allows the story’s perspective to refreshingly shift from observing Engels and Marx’s work life and ideals to registering the domestic decorum and politics that have shaped Lizzie’s life. As Frederick imagines what could be, resenting the illusory social norms that dictate what is, Lizzie, to survive, must occupy herself with the very reality he and his peers frequently abhor or ignore.


This is especially true within her home, where McCrea illuminates the hierarchy of early capitalism. After Lizzie and Frederick move to London from Manchester to join Marx, his wife, Jenny, and the rest of the Movement, Lizzie has the new and unnerving task of running a bourgeoisie household. After hiring two housemaids, both Irish, Lizzie is called upon by the ladies in the neighborhood. The conversation runs smoothly at first, but quickly dissolves into petty judgment once the women ask about a man (Frederick, of course) they’ve watched going in and out of Lizzie’s home at all hours of the day. Amid the tension one of the ladies bites into a piece of cake that had been secretly peppered by one of Lizzie’s housemaids. She does not fire her, or even beat her (as she would have been allowed). Though technically the equal of the women who came to visit, Lizzie thinks, “I can’t blame her for feeling angry and wanting to defy the laws of the wide world. I’ve been her. I am her.”

Love, like the home, becomes in the novel another means of understanding the finer details of social inequality. Long before her relationship with Frederick, Lizzie first became dependent on him through his relationship with her sister, Mary. While Mary’s love for Engels is fiery and impractical, Lizzie’s remains more pragmatic, the product of loyalty and security built over time. Lizzie is pulled between the steady if unexciting love she and Engels share and the blinder sort she feels for Moss, an undependable Irish revolutionary. Her passion for Moss is tempered by the reality of her financial situation, and Moss’s inability to provide for even himself. In bed with Moss one night she cannot reconcile her love with the material consequences it requires: “Leaving me to stare into the thought that there’ll never be light for me locked into this Irish lie.” After her sister dies, Lizzie fluctuates between desire for Moss and the necessity of the stability Frederick could provide. “In the final reckoning,” she says, “the good and the bad come to an even naught and the only thing left to recommend him is his money.”

Mrs. Engels is inescapably about the political: not just about hegemony, but how the distinctions among people based on ethnicity, class, race, and gender breed resentment and fear, and deter progress. However, how the novel, through Lizzie Burns, approaches those themes is captivating. On a trip to the London Zoo, Frederick and some other comrades, including Marx and Jenny and their teenage children, marvel at the animals in their designated cages. Lizzie is the only one who feels bothered by the literal and metaphoric image of the boxed-in lives around them. She thinks, “Am I the only one who sees it?” Mrs. Engels celebrates and scrutinizes Lizzie’s ability to identify the idiosyncrasies of Marx and Engels’s environment, to understand that the “world doesn’t happen how you think it will.” McCrae’s fictionalized account of Lizzie’s life captures the surprise and ambiguity of what that implies.