Issue No. 104 continues our 30th anniversary celebration with a portfolio of art by the late, great artist Jay DeFeo, a new story by best-selling author Glen David Gold (his first piece of fiction in more than five years), and much more, including:

Anthony Marra’s “The Last Words of Benito Picone”: A Buick sends him high above Market Street, and he lands in the everlasting company of a Soviet émigré and a young addict.


Patricia Engel’s “Ramiro”: Are there second chances for a slum kid and a teen girl working with the priests at San Ignacio?

Mauro Javier Cardena’s “Dora and Her Dog”: Meeting for ice cream in the Hayes Valley, his ex-girlfriend asks, What would you endure jail for?

You can get a copy of No. 104 here, or, better yet, order a subscription to ZYZZYVA and we’ll start you off by shipping you the Fall issue. 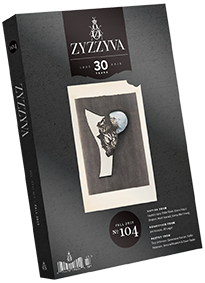 “In the Fall Issue” by was published in ZYZZYVA No. 104. Purchase the back issue in our shop.