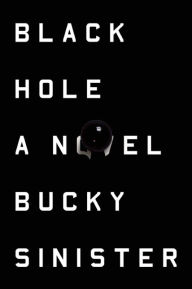 “The moment you buy your drugs, they start to run out.” Such is the dilemma of Chuck, the middle-aged, rundown narrator of Bucky Sinister’s first novel, Black Hole (Soft Skull Press; 181 pages). Perpetually strung out on all manner of narcotic, former punk rocker Chuck is dismayed to find himself “the freak in the corner” at parties where everyone is half his age. He inhabits a San Francisco much like our own—rapidly changing, driven by a booming tech industry—but ever so off-kilter. Bucky Sinister draws influence from the work of visionary science-fiction author Phillip K. Dick in crafting an alternate present where the trendiest nightclubs create their own designer drugs to hook patrons, bio-mechanics and “Zygotic Androids” are a reality, and a man like Chuck can earn a living by taking care of miniature cloned whales for rich techies with money to burn.

Chuck’s world is turned upside down by the arrival of a new marble-shaped drug that supposedly never runs out, but has the unfortunate side effect of causing its users to become unmoored from time itself. Now Chuck must navigate the hazy recollections of his ‘90s punk rock past while he tries to decide what’s more important: returning to the present or obtaining his next fix.


Black Hole is Sinister’s first work of fiction after four books of poetry and two self-help titles. The novel unfolds in a raw and highly conversational style, like a story told from the next barstool over. Despite elaborating on the sordid details of Chuck’s debauched lifestyle, Black Hole does little to glamorize its main character’s addictions: Chuck readily states on page one that “drugs will take as much as you have and return only a habit.” Sinister holds nothing back when it comes to chronicling the rut Chuck has found himself in, from his lack of personal hygiene to his dismal safe sex practices—but whoever said a novel about a drug addict should be a pleasant read?

Beneath the excess of Chuck’s life, Black Hole offers a sincere lament for the passing of a San Francisco of old, when it was “the town where you went if you were a weirdo with no money.” Along the way, Sinister delivers plenty of humorous observations about the city’s current tech-driven culture: “Brunch is the disco of this decade,” Chuck declares at one point, and later observes how many middle-aged rockers now drive a Prius to punk shows and pay for parking. Still, even Chuck—and, by proxy, Bucky Sinister—is savvy enough to realize the times we tend to wax nostalgic over aren’t always worth romanticizing in the first place. Youth culture’s tendency to chase what’s cool and trendy merely helps foster the mentality that “everything was better and cheaper five years ago and now it sucks.” Eventually, even someone like Chuck must come to the realization they’ve been trying to conjure the ghost of some elusive—or illusory—heyday.

The drug-addled nature of his protagonist grants Sinister the freedom to haphazardly jump from scene to scene in a manner that suggests black outs or distortions in reality; if Chuck is disoriented, then so is the reader. This is never more true than when Chuck finds himself strapped into the “space time bumper car” of the unnamed drug at the novel’s center, careening through the years like a strung out Billy Pilgrim from Kurt Vonnegut’s Slaughterhouse-Five. The set-up also allows the author to posit the question: if granted the opportunity to change our past, would most of us even know where to start? Before long, the narrative of Black Hole becomes something like a snake eating its own tail, as Chuck’s time travel exploits force him to confront a lifetime of bad choices repeated in a seemingly endless loop.

Some readers may be put off by the grimy details of Chuck’s illicit behavior (in truth, there’s likely a little something to offend everyone in Black Hole), but the novel stays true to a certain punk rock ethos. Like a band that would rather learn its instruments by playing shows than by taking lessons, Black Hole is more about passion than finesse. Even so, Bucky Sinister offers plenty of smart observations about the difficulty of maintaining one’s youthful ideals into middle-age, and how navigating the self-deceptions of nostalgia and addiction can be as treacherous as driving through a dense San Francisco fog.