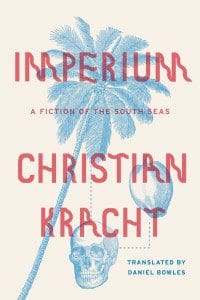 In the early twentieth century, a young German named August Engelhardt sailed to Kabakon, a small island in the German territories of the South Pacific. His goal was to establish an outpost from where he could promulgate his ideas, chief among them the belief that the proper way to live, spiritually and practically, was to be naked, to worship the sun, and to eat nothing but coconuts. From Kabakon he managed to disseminate frugivorist and utopian literature to Europe, and to entice to the island numerous followers, some of whose travel he funded. By the end of his life, though, Engelhardt was malnourished, disconnected, and delusional, a leprous skeleton who barely reached middle age and who seemed to prove by his own dwindling health the untenable idiocy of his philosophy. In Christian Kracht’s newly translated novel, Imperium (Farrar, Straus and Giroux; 179 pages; translated from the German by Daniel Bowles), Engelhardt is not merely an anthropological subject but “our friend,” and the protagonist not only of the book but of “the new age.”

Imperium is funny and short, but vigorous in its exploration of ideas and ambitious in its scope. Fiercely erudite, it is clearly the work of a man who has ingested all sorts of philosophies and literary traditions. While comparisons to classic adventure and maritime tales are inevitable, Kracht’s narrative sensibility echoes the self-conscious playfulness of 19th century French and Russian tale-tellers, and his obsessive focus on coincidences and ostensibly dissimilar yet interrelated phenomena reminds one of Pynchon’s intricate cataloguing of stories-within-stories, regardless of whether they are germane to the plot. (A digression, for example, concerning the alleged creation of the yeast by-product Vegemite under the aegis of the Kellogg brothers is particularly Pynchon-esque in its interpretation of corporate hegemony as a mechanizing force guiding individual wills.)


In this novel, like in Pynchon’s, everything is relevant, meaning nothing is unworthy of mockery or probing. Kracht’s exuberant prose flows freely, evincing amused disinterest and earnest philosophical rumination, and neither mode prevents him from indulging in jokes almost the entire way through. Kracht wryly ridicules whomever he thinks deserves it most in any given passage, sometimes resulting in hilarious revelations of character, as when he describes how the ineffectual Governor Hahl finds himself “standing under water, lathering up listlessly under the tepidly drizzling shower…because he preferred being sprinkled from above to lying moronically in the tub.” Kracht takes potshots at everything from Freudian theory and effete French intellectualism to popcorn (“hot, aerated maize”), but nowhere is he more scathing than in his treatment of the emblematic Englehardt and his bloated self-regard, despite the seemingly harmless absurdity of his story. Indeed, only a few pages into the novel, Kracht provides a blueprint for reading Engelhardt:

“Thus, as a stand-in, the tale of but a single German will now be told, of a romantic who was, as are so many of this species, a thwarted artist; and if at times, in the course of things, parallels arise with a later German romantic and vegetarian who perhaps ought to have remained at his easel, then this is entirely intentional and naturally, do pardon, consistent in nuce. At the moment, the latter is still just a pimply, cranky lad who gets innumerable smacks from his father. Just wait and see, though: he grows and grows.”

This passage, reflective of Imperium as a whole in the way it moves casually from glib jokiness to solemnity, is one of many direct and indirect parallels made between the novel’s hero and its most notorious joke-butt, Hitler; nowhere, though, is it made clearer. Imperium, even when most sympathetic to Engelhardt, thus becomes a cautionary tale, an examination of how capricious men with opaque motives can morph from insecure, misunderstood outsiders into fanatics with platforms, and of how loathsome ideology can metastasize under certain circumstances. As Engelhardt becomes weaker and madder, so, too, does his self-confidence grow and his casual anti-Semitic views calcify. Engelhardt is not a monster, really, but he is a stubborn man incapable of living within the structures of civilization; so he begins to blame a set of people whom, for myriad reasons, all of them demonstrably untrue, have been charged with imposing and perpetuating these structures. The insidious antecedents of the European weaponization of ideals and blame are at play in Engelhardt’s story, even if all he thinks he wants is a way to be himself and to help others live life as it “should be lived.” It turns out that this is hard to do when one is incapable of adapting not only to civilization’s mores but also to its inherent hardship and occasional harsh truth.

Engelhardt comes to believe in the Nietzschean way of living—as a work of art—and intuits that “possibly he himself [is] his own artistic artifact and that … only through his existence [is] the divide between art and life bridged.” But Nietzsche was said to have played piano naked in the madness that overtook him at the end of his life. Engelhardt, similarly, faces a humbling fate that effectively strips away the skein of mysticism. As Kracht writes, “the truth looks ever more mundane; the farther he removes himself from the community of man, the more outlandish his behavior and relationship to it grows.” He dies off-screen, as it were, and whether of leprosy or malaria or malnutrition or aversion to civilization matters little. It is a sad ending that still makes for a funny story—until that lineage is traced from Nietzsche to Engelhardt to another wretched German idealist, this one sumptuously costumed, stepping out onto a balcony to share his own grand vision.

One thought on “A Fevered Vision in the South Seas: ‘Imperium’ by Christian Kracht”