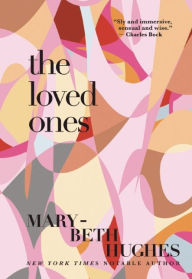 Even if Tolstoy was right about happy families, unhappy families in Western literature often bear striking resemblances to one another. The unfaithful, existentially-tormented husbands; the beautiful, unfulfilled wives; the precocious yet emotionally unformed children caught up in family affairs far beyond what they are capable of properly assimilating into their senses of self—we recognize these tropes partly because they are, sadly, representative of many actual families, but mostly because, also sadly, they make for instantly recognizable and compelling dramatic structures. It is, perhaps, unfair to levy such a generalization against the many writers who choose to tackle dissolute spouses and dissipating family units, but it is certainly incumbent upon these writers to bring something new to the table, if only for the reason that it is one heavily laden with offerings. Mary-Beth Hughes’s new novel, The Loved Ones (Grove/Atlantic; 289 pages), is in many ways a familiar portrait of a family tearing itself apart through avarice and ennui. But its contribution to the genre is its unflinching and intelligent exploration of the ways in which the characters—particularly the women—attempt to keep their pain from spreading to those around them.

The novel begins in the winter of 1969 and ends in the winter of 1971. Its perspective cycles among the three remaining members of the Devlin nuclear family: Jean, an “extraordinary looking woman”; her husband, Nick, equally handsome; and their daughter Lily, who seems not to have inherited her parents’ perfect genes. Absent from the novel is the youngest Devlin, Cubbie, whose death has precipitated (or perhaps only hurried) his parents’ downward spirals, and has colored and complicated Lily’s ascent into personhood. Cubbie’s presence is missed in more ways than one: the novel seems to want the reader to understand most, if not all, of the Devlins’ behavior as some kind of response to his death, but his memory is not particularly well-evoked. While this might be understood as an attempt to mirror the family’s attempt to reconcile their loss, it ultimately comes across as more of a glitch in structure and tone.


In this vein, The Loved Ones works by alternating promiscuously between detachment and identification, and by creating a haze between content and reader that mirrors the muddled confusion and dulled emotional lives of the Devlin family. Sometimes it works. Hughes is a skilled stylist; her prose is spare, even arid, and she eschews quotation marks and commas to create dense passages that are unyielding in their intensity and inexorability. Here are Jean and Nick, who might as well be strangers, having sex:

“She slid a leg across him and the archway molding jabbed into her back. He was wheezing now, but she was fully engaged with his zipper. She shimmied his trousers from his hips, a quick lift off; he could lift her still this way. He could. If he could just catch his breath. She pulled aside the baggy crotch of the purple panties, and deft, she was on him, eyes closed. Who are you, she said, sneaking into my house in the middle of the night.”

Hughes wisely avoids depicting the marriage as completely loveless, and the family dynamics are intricate and convincing, but she does not give the reader much of a foothold in the narrative. Nick works in the apparently bacchanalian cosmetics industry, along with his brother Lionel (Cubbie’s formal namesake); The Loved Ones takes place in New York and England, as the family moves back and forth in hopeless attempts to regain lost ground and chase new hope. It is remarkably difficult to follow the specifics of the narrative, perhaps because they do not matter particularly to the characters themselves, who seem to know that any search for something to hold onto is doomed. This makes for poignant moments, but also creates frustration when it seems Hughes is withholding rather than understating.

Hughes is capable of remarkable insights into how the women see themselves, into how they rationalize and compartmentalize the monstrous behavior of the men and boys in their lives. Her evocation of Lily’s interior life is measured and tender, and the sections that follow her are by far the novel’s strongest. These passages are  richly imbued with Lily’s sense of humor and intuitive insight while maintaining her teenage sensibility. In an affecting display of Hughes’s understanding of the confusing banality of tragedy, she describes Lily’s processing of Cubbie’s death:

“Cubbie was very quiet. His body didn’t move, just a small tremble close to her face like a butterfly might make. So when her parents took her to dinner later at a big table all to themselves and told her that Cubbie wouldn’t be living much longer Lily did know that. Then Momo arrived in Poppa’s new Eldorado to drive her back to New Jersey. Two days later, Lily woke up at her grandmother’s house and she didn’t have to go to school.”

This movement between the horrors of death to the frankness of quotidian life rings true, particularly for anyone who has experienced a family tragedy as a child. This  latent understanding of the way life will be bubbles under Lily’s consciousness throughout The Loved Ones. Lily, in an obvious if confused attempt to imitate her mother, puts herself in compromised positions with more than one sexually ravenous and equally confused young man. In what can only be described as an attempted rape, one scene deals with the twisted psychology of victimhood, as Lily’s remarkable empathy and instinct toward protecting those around her from hurt overtakes her sense of self-preservation.

It is a shame The Loved Ones ends with another tragedy, as Nick, who has sleepwalked his way through the novel, usually intoxicated by some mix of drugs and women, faces his comeuppance. Yet Hughes ends her narrative with a note of tenderness that does not feel unearned or hopeful or cathartic, but merely graceful, a reminder that her worthy contribution to the overstuffed stable of literature’s unhappy families is Lily Devlin.