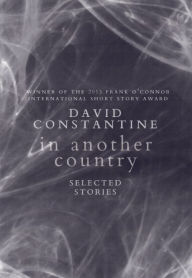 Readers of British author David Constantine’s In Another Country (Biblioasis; 277 pages) may identify in his stories certain hoary elements of style and material that have been all but abandoned by contemporary U.S. writers seeking to depict modern life in all its fragmented complexity. Absent are the ingratiating narrative voice, the frenetic observation, the satirical punches to the gut dealt to unworthy characters. Constantine’s characters have souls, and do such un-ironic things as write long letters to one another, which they send via mail. The stories are simply plotted, harrowing, and enduringly powerful; the prose is uncompromisingly lyrical yet rarely overwrought. Constantine’s old-world sensibilities imbue his stories with grace and seriousness, and his characters seem to exist not in any recognizable world, but in their own personal Limbos, wherein ancient forces and quotidian difficulties converge to create an immense pressure threatening to tear them apart. There is a pronounced fatalism through many of the stories, yet Constantine’s great skill lies in his ability to create moments that feel not like authorial intrusions but rather fleeting recognitions, whether of insurmountable loneliness or inchoate hope.

The collection spans almost twenty years of Constantine’s career, from 1994 to 2012. He has been writing poetry and stories, and translating French and German literature, for decades. Perhaps his work as a translator accounts for some of his prose style, which makes use of syntactical inversions and unusual phrasings to create dazzling passages at once imagistic and ethereal. In the epistolary story “The Island,” a young man describes the work he does to keep himself busy as he mourns the loss—whether real or imagined—of the unnamed woman he loves and the unspecified life he has abandoned:

“The leaves quiver like a haul of fishes dying brightly in the sunlight on the net. And the wind, almost every day the wind, bustling through the unkempt crest that I will lop. I rob the wind of a resistance by which it makes the passage of itself felt.”


This showcases much of what makes Constantine such a joy to read: a Nabokovian metaphor, unexpected yet entirely fitting (though perhaps slightly more morbid than Nabokov’s); melodic language; repetition; the sublime juxtaposition of “dying” and “brightly”; the unusual choice of the word “lop,” somehow both playful and ponderous; and the transition from the solidity of an action to its aestheticization.

This grounding of elevated poetics within the prosaic occurs often, and Constantine maintains the balance adroitly, whether on a sentence-by-sentence basis or more broadly within the stories, which tend to crystallize around a particular image or idea. In “The Loss,” a successful businessman’s soul exits like a bird through his mouth as he gives a presentation to an appreciative audience. The horror of the story lies in Mr. Silverman’s immediate recognition of this loss, and so, rather than sneer at some faceless businessman’s comeuppance, we mourn with him. When we learn he cannot weep, we hope for some release, and Constantine waits until the story’s end to provide a possible solution, a macabre escape, but one that seems less like the mechanistic release of a Poe story than like a tragic and undeserved fate, wrought not by Constantine, but by the circumstances of the story. It speaks to Constantine’s ability to convey isolation and dull misery that the most poignant moment of “The Loss” is not its gruesome end, but its penultimate paragraph, when Mr. Silverman looks at his wife, to whom he has been unfaithful: “And he watched her vanishing behind her eyes, to where she really belonged.”

Indeed, Constantine’s world is full of intractable sadness, often brought about by couples’ inability to communicate and know each other and by individuals’ inability to shore against their ruin such fragments as escape, companionship (almost always forced, in some way), and creation (always arduous)—which, in these stories, are vastly different from relief, love, and creativity. But there are frequent moments of tenderness, and sometimes the characters’ understanding of their circumstances can lead to Joyce-like epiphanies or even catharsis. Characters speak elliptically, and seem to know so well their places within the world Constantine has created for them that they can reveal their entire lives through one line. In “The Cave,” Owen tells Lou, the woman he is seeing, about his estranged daughter after he neglects to hide a photograph in his home:

“We kept in touch, she wrote me letters once a year at least. And then soon after Natalie’s eighteenth birthday came that photograph and a note she was starting art school in Newcastle on a certain day. I stood five mornings there, it was only on the third I saw her and on the fourth and fifth again. That last day was very bad. I saw her and it went through me.”

What better way to evoke such profound, lingering pain felt in a moment than “it went through me?” Later, Owen brings Lou to a cave, in which there is the ever-present sound of water, ancient and healing, yet incessant and unknowable, that by turns induces dread and calm in Lou, who grows fearful of “the pulse of inhuman life in total darkness” (another sublime juxtaposition). Owen, reflecting on the “old mechanics”—that is, “the old chaos of fire and flood”—remarks on the lovelessness of the natural world and the grief humans feel as they “hurry… to ruin.” “No other thing on earth feels sad like that,” he says, “because nothing else on earth can know and love the way we do.”

Yet while Constantine believes in the lasting human capacity to love fiercely, he seems less sanguine about the capacity of humans to reverse the tides when we are the ones who have caused them to turn.

Many of these stories deal obliquely with a lack of agency in the midst of overwhelming natural forces; the closest Constantine gets to direct engagement with global warming and the dissolution of the planet comes in the titular story, the collection’s best:

“At dinner time he said: This global warming… What about it? Mrs. Mercer said. I read some more about it in the library in a magazine…They’re very worried in Switzerland especially. Where’s all the water going? The glaciers are melting but the water’s not come down yet.”

There is some comedy here, in Mr. Mercer’s somewhat obtuse way of approaching the issue, and in the rendering of a conversation between an old couple who have already exhausted most dinnertime banter. But we slowly learn what Mr. Mercer fears: Decades before, the woman he loved died tragically, became entombed within just such a glacier, and was lost; he has just received a letter notifying him of her reappearance. He muses, “She’ll come down when the waters break with mud and rocks and anything human in the way of it will be wiped out. But we shall be dead by then and turning in our own clay in the earth.”

As the ice melts, the story begins to take shape, and we begin to understand what Mr. Mercer has lost: Not just his lover, but her baby; not just his youth, but his peace. The story’s tendrils reach back into the past, into the era of Mussolini and Hitler, and out into the future, when the glaciers will melt and the waters will run. In this way, Constantine likens the ruin of the planet with the reemergence of buried misery; as we forge ahead, what we have hoped to leave behind will present itself in new ways, unavoidable in its recurrence. Constantine wisely keeps the action of the story within a few blocks of the Mercers’ house, compressing time, place, and history in an intense moment of desperation, a load that weighs on characters throughout the collection, a load that can only be lightened by giving oneself to something, to some emotion—often abject sadness, in the form of tears—or, in rare times, to a person. Sometimes this release comes too late, sometimes it comes just in time; but the waters will always break, no matter who is ready to be swept up, and who is not.

One thought on “Old Souls and Deep Sadness: ‘In Another Country’ by David Constantine”