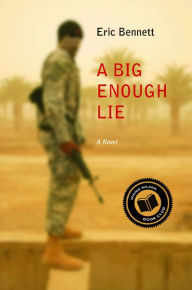 Eric Bennett’s first novel, A Big Enough Lie (285 pages; TriQuarterly Books), is fiction within fiction. The novel opens with best-selling author John Townley sitting in a studio green room, waiting to discuss his war memoir, Petting the Burning Dog, for the second time on the Winnie Wilson Show. There’s just one problem. The memoir is a fabrication, written under the name Henry Fleming, who happens to be a real second lieutenant in the U.S. Army. Fleming is missing in action in Iraq and was the leader of the “Babylon Seven”—a platoon captured and executed on video. Townley suspects his second appearance will expose his lies on national television; the show’s second guest is Antoine Greep, the platoon’s sole survivor.

What follows are mirrored back stories told in alternating chapters—Townley’s life, beginning with his adolescence and young adulthood in Florida, and Fleming’s first-person war “experience”—that build to the looming second interview. But the reader should heed these narrators with caution. Bennett, an associate professor at Providence College, shows his mastery of craft as both narratives ponder objective and subjective truth. Both stories play with ambiguity, embellishment, and outright lies. Before his interview, Townley imagines himself asking, “What if there are truths we can absorb only through hypothesis and imagination? What if there are powers of sympathy exercised only by exposure to the untrue?”


Townley’s early history is recounted with a sense of shame. Depressed wanderlust, failed attempts at writing fiction, and an inability to form healthy relationships inspire him to avenge his shortcomings with a hoax. For Townley, deception is a survival skill, one that progresses in its seriousness until it culminates with his calling his war book a memoir. Petting the Burning Dog borrows entertaining anecdotes from Townley’s youth and hijacks material from a stolen box of photographs and videos belonging to his best friend, Marshall Stang, who served in Iraq. Showcasing this idealized version of Fleming satiates Townley’s ego and, ironically, acts as a catharsis for past failure and humiliation. (The twin narratives are further enhanced by the viewpoint and experiences of Townley’s ex-girlfriend, Heather, a poet who, coincidentally, loves conspiracy theories.)

Bennett’s descriptive powers add emotional color and visceral weight A Big Enough Lie. A grandmother resembles a “withered potato,” and a barfly looks “like a gremlin guarding a pie.” War-torn Baghdad is captured in passages such as “the air smelled like burnt aliens,” “the crepitating fanaticism of the mosque calls,” and “freedom of the market did not lead to freedom of the roads.”

Bennett also invites reading between the lines by highlighting scenes of dramatic irony. Lieutenant Fleming, it turns out, is an amateur fiction writer who has studied the classics. Antoine Greep impersonates a soldier with a similar last name in a news interview. And Fleming’s platoon is later ordered to Babylon as a public relations stunt—protecting archaeological sites so history’s truth can be preserved.

A reflection on truth, adolescence and adulthood, the U.S. war machine, and the media narrative of a contested war, A Big Enough Lie packs a gut punch. Its characters’ motivations and the consequences of their choices leave the reader to ponder if and when lies can serve the truth, and vice versa—and marvel at how Bennett has presented that dilemma for the reader.