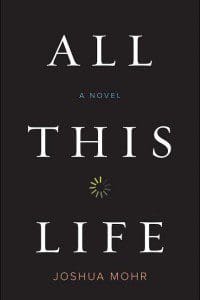 Is loneliness the de facto spiritual condition of the Information Age? This is the central question that seems to loom over All This Life (Soft Skull Press; 294 pages), the latest novel from Bay Area author Joshua Mohr. In the book, Mohr trains a scathing lens upon our 21st century culture, one that craves personal connection and yet seems to have forgotten the value of face-to-face interactions, opting instead for a constant stream of YouTube videos, live Tweets, and Facebook status updates. “All that matters is content. New content. More content.” The setting is San Francisco circa 2013, a city where zealous Apple employees “swarm like Jehovah’s witnesses” and promise “video quality that looks better than the real world,” a place where a booming tech industry has driven rent prices up toward Manhattan levels and has dismantled “every bit of strangeness that once made San Francisco extraordinary.”

As the novel opens, a fifteen-piece marching band performs along the walkway of the Golden Gate Bridge, moments before each member unexpectedly leaps to a watery demise in front of morning commuters. This strange and beguiling event, which carries shades of notorious death cults such as Heaven’s Gate, becomes something of a personal 9/11 for many of the characters in the book. This includes disaffected teenager Jake, who records the event on his iPhone and uploads the shocking video to YouTube, garnering thousands of views. Estranged from his recently divorced parents, Jake finds himself increasingly retreating into the comforts of technology—after all, the iPhone’s automated voice Siri is “smart and kind and helpful and never bothers anybody with condescending lip-pursing.”


Each of the characters in the novel’s robust cast finds him- or herself grappling in various ways with the overwhelming technological stimulus of the 21st century, as well as matters of addiction—whether to a smartphone or to a liquor bottle—and the difficulty of articulating one’s inner self. There’s Sara, a young woman who must deal with the public shaming resulting from a private sex tape being leaked to the Internet; and Rudy, her former childhood sweetheart, who now suffers from a speech impediment following a tragic accident as a teen. Living in San Francisco’s Mission District, Rudy’s mother, Kathleen, struggles with the guilt of abandoning her family as she tries to maintain a vow of sobriety. These fallible and well-drawn figures behave in relatable ways as they threaten to make grave, life-altering mistakes or potentially rise above the digital noise consuming their lives. As the chapters build, the cast of All This Life find itself pulled as if by a tractor beam back toward San Francisco’s iconic bridge, where the novel builds to a fateful climax.

The story is driven by the twin engines of its characters as well as Joshua Mohr’s smart and punchy prose, which packs the wallop and sentence melody of the best kind of acerbic journalism. Each chapter is full of highly quotable maxims that seek to comment on our digital era, whether it’s “Commerce always trumps compassion” or “Hashtags are like emotions people can see.” Any writer who attempts to tackle the cultural zeitgeist takes a great risk, but Mohr clearly has his finger on the pulse of a city—and a country—in a state of flux, peering through “a haze of blue computer life.”

Readers may find the novel rushes headlong through its conclusion, yet along the way Mohr manages to explore a host of issues, including our culture’s deep-rooted fear that the future won’t be brighter, that the crises facing our planet—from global warming to the corruptive power of capitalism and existential malaise—mean our way of life is simply no longer sustainable. Given the heavy subject matter, it’s a testament to Mohr’s talent that All This Life never seems overwhelmingly dour, in part because of moments of levity sprinkled throughout, in part because the reader senses Mohr is a confidant. It becomes clear the author himself is simply trying to cut through the cacophony of blog feeds, social media, and cable news that bombard us at all hours of the day. If the novel leaves the reader wondering how can we possibly cope with this much stimulus, with all this “life,” in the end Mohr seems to suggest our redemption might be found in the empathy of others, in the dawning acceptance that “The world can be beautiful and horrible at the same time.”

All This Life is the kind of book that, thirty years ago, would have been called a prophetic slice of cyber-punk. Today, it just so happens to be the world we live in.

One thought on “Peering through the Haze of Digital Commotion: ‘All This Life’ by Joshua Mohr”