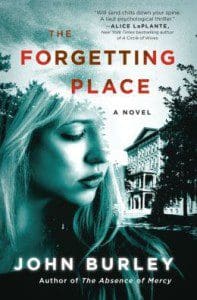 “Menaker State Hospital is a curse, a refuge, a place of imprisonment, a necessity, a nightmare, a salvation.” So opens John Burley’s The Forgetting Place (344 pages; HarperCollins), an atmospheric medical thriller with a fictional mental hospital as its core setting. Burley’s new novel follows resident psychiatrist Dr. Lise Shields, who is assigned a new patient, Jason Edwards, who has a mysterious past and an even more secretive admission. Much of the novel’s first half is spent on Dr. Shields’ attempts to coax the truth out of her reluctant patient and the hospital administration. Faced with a bureaucratic stonewall, Dr. Shields thinks, “So often we are the only tangible thing anchoring our patients to their delicate perch above the abyss.” As her concerns deepen, she discovers an institutional conspiracy that puts her and Edwards in danger. She takes drastic action, which hurls the story into its second act.

Woven into the plot is Edwards’ backstory as well as the formative experiences from Dr. Shields’ childhood, which she spent alongside a schizophrenic but doting uncle. In these recollections, Burley, who is also an emergency medicine physician in Northern California, gracefully characterizes, without cliché or stereotype, the struggles and joys of a family dealing with mental illness. These glimpses into the characters’ pasts propel the events of the story rather than bloat them.


Also, Burley’s tight, first person view is enriched with a generous pondering of Dr. Shield’s conflicting thoughts and impressions: “… the reason we do not trust each other is because we do not trust ourselves. We know all too well what we are capable of.” Themes of identity and transformation are at the fore here, and as Dr. Shields unravels the conspiracy, the reader ponders which are truths and which are lies.

Burley, whose first novel, The Absence of Mercy (2013), won The National Black Ribbon Award for new voices in suspense fiction, is adept at creating atmosphere through character perception. Namely, how the characters are affected by the foreboding power of Menaker State Hospital, whose presence overshadows the entire novel, whether the action is taking place there or not. In a moment of reflection, Dr. Shields thinks,

“Places have a memory. A house in which people were murdered is never the same again. Evil and violence have a way of settling into the walls like toxic chemicals. Over time, those chemicals will seep from the pores of the drywall. They will poison the people residing there if given the chance.”

By treating the Menaker campus as a character itself—salting the setting with unnerving details such as “black wires descending like necrotic umbilical cords,” or describing Menaker’s patients with “huddled psyches”—Burley maintains tension throughout his smoothly told story. The Forgetting Place is a bleak but resonating exploration of mental illness. And though the plot may lead readers to suspect the conclusion early, Burley has nonetheless created life-like characters whose choices are troubling yet invite empathy.

One thought on “A Mental Hospital’s Foreboding Power: ‘The Forgetting Place’ by John Burley”