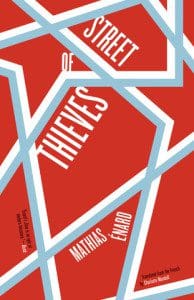 Set during the revolts of the Arab Spring and the collapse of Europe’s economy, award-winning French author Mathias Énard’s new novel, Street of Thieves (265 pages; Open Letter, translated by Charlotte Mandell), follows the life of a young Moroccan man living in the lower fringes of society, always working toward a future that remains a bit out of reach. “Men are dogs,” Énard writes at the beginning, “they rub against each other in misery, they roll around in filth and can’t get out of it…”  Amid that grime and grit, we witness the transformation of his narrator, from boy into man, from cowardice to courage, a change shaped by both the animality and the pressure of a society where people, like beasts, do whatever it takes to live.

For Lakhdar, who’s in exile from his family, existence has become a series of low peaks and even lower troughs—interludes of relative stability interrupted by ruined relationships, burning buildings, dying men. At the start of the story, Lakhdar commits a religious offense related to his feelings for his cousin (and first love), prompting his family to disown him. Too afraid and ashamed to make amends, Lakhdar takes to the streets. There he survives as a beggar and thief until his childhood friend Bassam puts him in touch with Sheik Nureddin, who provides Lakhdar with shelter and employment as a bookseller for the Muslim Group for the Propagation of Koranic Thoughts. Lakhdar soon meets Judit, a Spanish student visiting Morocco, and she becomes both his lover and his only source of hope and calm.


While Lakhdar and Bassam’s friendship continues under the shared guidance of Sheik Nureddin, Lakdhar begins to believe the Group is responsible for violent acts of Islamic extremism. After he suspects them of two recent attacks on civilians, Lakhdar flees for Barcelona, leaving behind yet again his community. Fear and paranoia follow Lakhdar to Spain, and the future and freedom he hoped for seem less and less conceivable.

Written in past tense and told from the point of view of an older Lakhdar, who reflects on and retells the events of his life, the narrative takes on an almost didactical nature in its depiction of personal struggle amid social and political turmoil on both a small and a global scale. Riots and violence in the Arab world are echoed in the Western world of Barcelona. But in an era of discontent and corruption, even the more fortunate middle class is under siege. As Lakhdar navigates various Barcelona neighborhoods, ultimately finding himself living on Carrer Robadors (“Street of Thieves”), we see the greater forces of Fate with a capital “F” and of social injustice manifest in the destinies of Lakhdar, Judit, Sheik Nureddin, and Bassam—all of whom have drifted from each other in vastly different directions—psychological, physical, and ideological.

While written as a straightforward linear narrative, Énard’s novel occasionally strays into the future tense, adding a dimension of inevitability that is central to the novel’s themes of fate and imprisonment. Énard also weaves in a few Islamic fables of captivity, blending the ancient and mythic with the contemporary and very real trials of the narrator. This creates a context that makes the novel’s tragic ending both fitting and inescapable.

Yet Énard never loses sight of the good of humans, too, giving us glimpses of beauty and hope. As his world seems to burn around him, Lakhdar might occasionally see beautiful lights across the strait, or find solace in the soft fur and panting calm of dogs keeping him company, or share a respite with Judit. Énard’s mystifying prose, with its eternal sentences often spanning entire page lengths, echoes the poetry of human struggle. And as the dramatic ending suggests, it is the courage and selfless spirit inherent in even the most accursed that makes humankind both magnificent and heartbreaking.