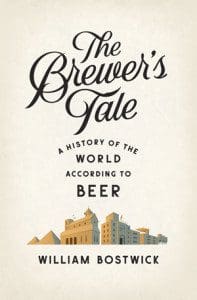 William Bostwick begins his narrative with a question: “What we drink reveals who we are but can it also tell me who we were?” Tracking down the answer means Bostwick must balance a bit of time travel with solid historical research, and interview a cast of contemporary brew masters. And taste a lot of beer.

When not tending bar in San Francisco or caring for his bees, Bostwick is a beer critic writing reviews for several national publications. He is also a passionate home brewer.

Blessed with a sensitive palate and a talent for great storytelling, Bostwick deftly combines his gifts in his newest book, The Brewer’s Tale: A History of the World According to Beer (288 pages; Norton).

The book builds its narrative on brewers past, through portraits of individuals Bostwick calls his “eight drinking partners.” With a chapter devoted to each, among them Babylonians, shamans, monks, farmers, industrialists, patriots, immigrants and advertisers, he travels through the continuously evolving world of brewing.

When not unearthing ancient beer recipes such as a 3150 BCE sorghum beer flavored with grapes, or a Swiss abbey beer laden with rosemary, pennyroyal and wormwood, Bostwick fires up his own brew pot re-creating the brews he encounters. “… like a Nordic brewer supplanting a bit of Hochdorf grain with lingonberries and wine, I mixed up a kettle of malt smoked over peat moss, a little honey from my beehive, and some frozen cranberries. I added herbs and poured it into a gallon jug—the biggest cauldron I had.” Another venture finds him re-creating a recipe of George Washington’s for his family’s Thanksgiving dinner. (Washington, it seems, had a taste for spirits. Dane Huckelbridge’s Bourbon: A History of the American Spirit recounts the story of Mount Vernon becoming one of the largest commercial whiskey distilleries in America, producing 10,500 gallons of good drinkable whiskey in 1799.)


In his chapter “The Industrialist,” Bostwick tells the story of porter, “the world’s first industrially made beer.” He sprinkles in the definitions of hydrometer and the Maillard reaction; and how Prime Minister Benjamin Disraeli’s 1876 passage of the Sale of Food and Drugs Act, paved the route for modern food inspections.

Moving along the time line, Bostwick chronicles the demise of the beer garden; the evolution of bars into business establishments; and he explains what brown glass and the crown cap did for industry standards in the 1890s; and why Western Americans shunned dark heavy beers preferring cold, light brews.

When Bostwick reaches the final chapter detailing today’s corporate beers, the story echoes the fate of much of America’s mass produced foods. “Place no longer dictated available ingredients,” he writes, “and so ingredients no longer dictated taste. A beer’s story was told not in flavor but in advertisements.”

ZYZZYVA: You earn a living writing about beer for various publications including GQ, Bon Appétit and the Wall Street Journal. How did you land a job as a beer critic?

William Bostwick: I started out as a home-brewer, frustrated that every home-brewing book was geared toward making large, five-gallon batches of beer—way too big for me to manage in a tiny apartment. So I wrote my own book, Beer Craft. I had been writing for magazines about architecture and design, but Beer Craft got me writing more about beer, and I started to notice that even as the craft beer scene got bigger, more creative, more dynamic, coverage of it in most newspapers and magazines was lagging behind. The Journal, for example, had a handful of great writers covering wine—but no one writing about beer. It’s a complicated but fascinating world, and new to a lot of drinkers. I figured I could help out, so I started pitching stories.

WB: The world of beer is incredibly diverse—styles, flavors, ingredients, brewing processes. Beer itself goes back to the birth of modern civilization—it’s as old as we are—so its no surprise it has evolved in so many directions. What was surprising, though, was how little thought we sometimes give to those flavors, and their origins, and how they’ve changed over time. And how those changes reflect how we’ve changed ourselves. Rich, dark, sweet-sour beer used to be all the rage; now we like light, bitter IPAs. Why? What happened to beer? What happened to us? So I started tracing flavors and styles back through the ages, recreating their historical origins in my home kitchen—some unexpectedly delicious, some best left buried in the cellars of time.

Z: You couple extensive historical research with interviews of those you call “masters of the styles I was re-creating, experts in their eras, or simply brewers who could best translate their stories-who understood their deeper significance.” Could you talk about these individuals?

WB: Most of the brewers I met were ghosts. No one’s making many of these ancient beer styles any more. I had to dig up the past to re-create it. But I did find a couple like-minded, anachronistic beer nerds who shared my curiosity. Guys like Brian Hunt, who brews with wild-foraged herbs like Labrador tea and redwood twigs. Or Sam Calagione, who went to Egypt to capture primordial spores of yeast to brew an ancient Mesopotamian beer. Then there were brewers like Steve Dressler at Sierra Nevada, who aren’t so much re-creating old styles—Steve worked on Sierra’s Ovila series of abbey-style beers—as rethinking and updating them.

Z: You write that beer was the first engineered food. Could you explain?

WB: Beer won’t happen on its own. Fruit is ready to eat, animals just need to be tossed on a fire, let some grapes sit out for a while and you’ll eventually get wine. But beer needed a human hand to come to life. We had to domesticate, cultivate, and malt grain, for example, to turn its indigestible starches into sugars that yeast can eat. We had to learn to manage fermentations to keep that yeast healthy—temperature control, sanitation… And when brewing started to become a business, which happened really early on in its history, we had to start building specialized equipment, and make recipes we could reproduce and scale up. Learning how to make beer made us modern, civilized humans.

WB: Giant serving vessels tell us something about how beers were ceremonially shared among large groups; ornate glasses that showed off the color and clarity of bright, pale pilsners speak to the value of those beers—status symbols, when they were first created.

Z: In your notes you mention you were inspired to write The Brewer’s Tale by the social and political implications in A Revolution in Eating: How the Quest for Food Shaped America by James. E. McWilliams. How so?

WB: McWilliams writes about how the changing tastes of American eaters, and the changing flavors of American recipes, reflected the political and social evolution of the new country. I liked that idea—how food can tell a deeper story about us as cooks and eaters, but also as creators, citizens, humans.