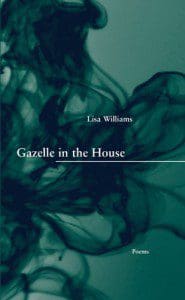 As the title of Lisa Williams’s new book suggests, this collection of wild and graceful poems are untamed yet bound to the confines of the page. Gazelle in the House (New Issues, 87 pages), Williams’s third poetry collection, showcases the elegant range of a poet who listens deeply to the world around her. In the poem “Thelonious,” she reaches out to the jazz legend, displaying a particular knack for evoking the rhythms found in jazz:, “the crooked / passage that a flood can settle: / nuanced tread, asymmetrical / ramble only he could muster / from the backward drift of fingers: chords.” Again and again, Williams relates so poignantly to other art forms, especially music, that we hear the euphonic sounds within the poems.

In “Spilled Milk on Banjo,” she retells a childhood memory of her mother playing the stringed instrument. We can hear the rhythmic strums in the lines as her mother plays “with her clicking silver finger picks / like claws like a machine gears flashing / faster and faster her curved hands / raking across the strings such ringing.” The lack of punctuation and expert line breaks make this poem seem childlike in the disjointed and sporadic nature of the language, especially in “I am sad girls are indelicate banjo / strings taut in their silver girdle / sharp in memory as my mother.” The broken syntax throughout the poem evokes the tragedy of the memory and enacts the way we often remember childhood experiences.


This collection is divided in five parts, each exploring a thread in Williams’s thematic range, and in the second section, Villa Medusa, the poet explores her interaction with water and marine life. (This section is especially representative of the way Williams engages with the natural world.) The poems are not solely observation, as is indicated in the opening lines of “Octopus,” in which she writes, “In my room, I can conceive of your / splayed arms combing / water’s bluish weight, your skin / vacillating as you shudder.” She describes her imagined creature and how the octopus moves in seawater. And it is not until the final couplet that we see the comparison “not so different / from my grasping mind. / Except that you are arms following mind.” The way she twists a seemingly whimsical poem about an octopus into a metaphor for the imaginative mind is flawless and surprising. She puts herself in the animal’s place again in “Fiddler Crab” in which she imagines what life walking sideways would be like and how it might compare with the adventures of a snail.

Williams’s poems are brimming with scientific inspirations and often take the scientific findings of older researchers into the form of poetry. “The Swallow That Hibernates Underwater” gives us her take of Gilbert White’s hypothesis from the 19th century, repeating both in the first and last lines “He kept them close. He dreamed their weight in water.” Writing about scientific hypothesis that have since been dispelled is brilliant, because it allows her to inhabit both the world of the research and also the researcher, and how he must have felt emotionally attached to his doomed hypothesis. In another poem Williams addresses the experience of polar explorer Richard Byrd, chillingly conveying what trekking through the ice caps must feel like: “You were cheek on crystal, in a terrible fallen / field, your left leg dangling over/ the roof of a crater toothed with punched / translucence.”

The collection’s most harrowing poems arrive in the fourth section titled Experience, in which Williams alludes to traumatic childhood experience and dreamlike pain, beginning with the poem “Dream Needle,” in which she writes: “I was a maze of scars, the one / I remember most a seam from my chin / to my throat down to my navel.” In the poem “Experience,” she writes, “It’s not supposed to hurt like this.” Later in the poem she writes of the physical pain of separation and distance: “It hurt—that separation—like tear. / But soon I felt familiar daylight sear / my pupils, felt myself alone as always.”

Gazelle in the House is emotionally vast and yet distinctly defined by one voice, one poet. Lisa Williams navigates the experiences of life with so much emotional tact that the reader is compelled to follow her lead. It is a startling yet fluid work, a surreal and unforgettable experience.