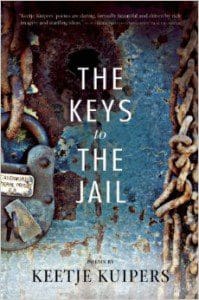 In the title poem of The Keys to The Jail (BOA Editions, 92 pages), the latest stunning collection from poet Keetje Kuipers, the poet writes, “We tell our sad stories / until the dog hangs his head.” Those two lines shadow the collection’s heavy sadness, but it’s a sadness from which Kuipers crawls out of, escaping the morbid nature of life and displaying a gift for relating her experiences of the world. We feel we are discovering the world as she is: “the breath / is our own, the voices belong/ to you and me.”

The poem that follows, “Birthday Poem,” elaborates on selfhood and discovery as she opens with the gorgeous line: “My earliest memory is someone else’s.” With this poignant opening, the title suddenly becomes so fitting for the poem. With each birthday we rediscover ourselves, older and stranger, leading to the poem’s final arresting lines: “ One minute I’m becoming myself, the next I’m forgetting how.”


Kuipers is an expert in form, aligning the sentiment of each line to the appropriate formal scheme. Each turn of the page brings a surprise, and every poem is built to scaffold the language line by line. The construction is seamless, and incredibly important to the foundation of the collection. The formal shifts from poem to poem aid in the harmony between form and meaning in a pleasing and entertaining way. “At the Museum of Modern Art” is a great example. In it, the speaker compares loneliness to modernity while visiting a Diebenkorn exhibition. The speaker reaches out to another, but still remembers “I can’t forget that I belong alone.” The poem is arranged in couplets until the lone last line: “Come home. Help me find a way.” The tight couplet form works to give that last line a great big push, so when you read it alone with the expectation of a following second line it hits you that much harder.

Kuipers also uses couplets in the series of five poems tucked into the middle of the collection titled “Five Women Ending in a Flower,” each poem exploring a female persona. The consistency of couplets creates a harmonizing quality among the characters, even though they are very different in each poem. In the first poem of the series, “The Girl,” the narrator repeats why over and over, beginning most sentences with why not as questions, but more like answers, such as, “Why I don’t answer when you ask if I’m / okay. Why I fake pleasure when I feel pain.” Then the poem turns and begins to reply to the never-asked questions, “Is laughable. Is wince- / inducing. Is my mother’s frown over the phone.” These poems lead the reader to ask many questions. In “The Wife,” we wonder about failure and raising children; in “The Whore,” we consider the rest of her story untold in this poem and what led to the realization that “Desire doesn’t make us / belong to each other.” Despite the neat couplets, the content is wild, and the women here are as isolated as the narrator in “At the Museum of Modern Art.” By using couplets in her exploration of loneliness, Kuipers taps into the great human question of selfhood and our isolated existence. This proves a brilliant poetics technique, and succeeds again and again through the collection.

In opposition to its title—in which we envision one jail, one place, one set of keys—this collection travels. The poems range from San Francisco and icy winters to the rich language only found in rural landscape and repeatedly back to the ocean. The poem “The Ocean” perfectly enacts the feeling of being exhausted of a place and yet unsure of where to go next. “There are too many views of the ocean…She is sick of the fucking ocean. / But where can she go?…All her friends want to know / what’s so bad about the ocean. But she can’t tell them.” The poem swirls around the ocean yet describes how place and scenery can make you feel hermetic discontent. In another poem, with the confident and exploratory title “I Wasn’t Searching for a New Language, But a New Meaning,” Kuipers is also talking about place, but through language and meaning, creating a life ars poetica. “But now I’m / confusing myself,” she writes, “thinking meaning comes from form.”

That poem and so many others in The Keys to the Jail attempt to explain in a truthful and searching way the isolation of regret and the sussing of who’s at fault for our mistakes. In this striking, beautifully crafted collection, Kuipers has found a way to reach out to her readers and, without being trite or selfish, hits the bulls-eye on the commonality of loneliness we all feel.

One thought on “‘I can’t forget that I belong alone.’: Keetje Kuipers’s ‘The Keys to the Jail’”