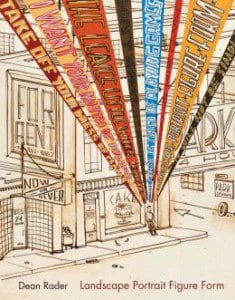 There’s a little room adjacent to the Djerassi Gallery of the San Francisco Museum of Modern Art in which, during the Paul Klee at SFMOMA exhibit in 2011, several of Klee’s small drawings and sketches hung. While the main gallery—spread with bright, prismatic paintings on large canvases—was overwhelming, the little annex was quieter and still, its pictures more thoughtful and muted. It was a place to ponder and absorb the dazzling content and heady theory of Klee’s works, a place for the emergent patterns of thought and art to coalesce and make themselves known.

Dean Rader’s new chapbook, Landscape Portrait Figure Form (Omnidawn Publishing, 46 pages), is a lot like that little room: it’s small, reflective, and haunted by Paul Klee. As we learn from the Notes, a few of the book’s poems were inspired by that very exhibit at SFMOMA, and several are ekphrases based on particular paintings: Ad Marginem, Angelus Nous, Man in Love. Klee’s writings feature as prominently as his visual art; the chapbook’s title refers to concepts from Klee’s lectures on modern art and pictorial studies, which, according to Rader, “sound very much like poetic theory.” Even those poems not based on particular works of art employ painterly terminology and visual schematics to contribute to an ongoing dialogue between literary and graphic media. There are self-portraits, sequences, triptychs, and choose-your-own-adventure poems, whose sharp, uncanny imagery punctuates abstracter philosophical musings. There’s an elegy for Adrienne Rich and a poem starring Frog and Toad. There’s even a poem written as a Wikipedia article, which ZYZZYVA published last year along with several other poems from the collection.


In “Becoming Klee, Becoming Color,” Rader writes of the artist, “Ask, he does, of tenor // and timbre, for the hand to unbutton / color’s blouse. Instead of blouse.” Here, assonant syllables resonate and mutate through the verse; trochaic “tenor” becomes trochaic “timbre,” whose vowel sound recurs in “hand.” But Rader is too self-conscious a narrator to remain in this prosodic, almost Keatsian mode; he interrupts the flow of his verse with the short, fragmented declarative: “Instead of blouse.”

This poem, like most of the others, is preoccupied with the pursuit of Platonic truths—with accessing what Diana Fuss calls “the invariable and fixed properties which define the ‘whatness’ of a given entity.” An unerring essentialist, Rader’s narrator vacillates between glorifying art as a medium through which to access a purer reality and indicting art as an inadequate simulacrum of purer reality. In “American Self Portrait III,” Rader writes, “Our lives / are language, our desires / apophatic,” yet later in the same poem, he asserts, “We want what / language won’t do.” In each of these poems exists a dialectical dance between the belief that consciousness is preverbal—that is, innate and immaterial—and the belief that it is metalinguistic—that is, an emergent property of language, and therefore inherently material. In the above passage, Rader’s Klee wants to render, “[i]nstead of blouse,” an elemental or elevated blouseness in his painting. But how can he make paint—in all its gooey palpability—into a Platonic form?

Like many poets overwhelmed by semiotic quandaries, Rader’s verse is highly self-referential. Often, he narrates his own aesthetic choices (one poem begins “In each stanza of this poem / There are five lines,” while another reports, “it’s line 45, and the poem is tired of playing games”), and much of his diction borrows from Klee’s jargony writing on art. In “Becoming Klee, Becoming Color,” Rader pulls off the meta mode with lyrical grace; other poems, more mired in their own reflexivity, are harder to get through. Yet even at his most hermetic, Rader gives the impression of a man trying in earnest—via ekphrasis, formal constraint, and disciplined self-examination—to catch himself in the act of turning reality into experience and experience into meaning. And as moments of lyrical, lucid observation accumulate, the poet approaches something like a true self-portrait.

“How We Survive: A Triptych” contains many of these moments. While it’s not one of the six poems with the phrase “Self Portrait” in the title, it strikes me as one of the most revealing. Take Part III for example:

Tonight I made love to you wearing
a suit of armor. I kept saying armor,
armor, armor over and over until you
reached up and closed the facemask.
Inside the helmet my voice hummed
like an engine on a long car ride,
my words driving me far into the
two-lane road of your body’s night.
I tell you this even though I know
how much you hate it when
I recount the recent past, a
voice over telling us either what we
already know or what we want
to find out. But the world comes
to us in stories, and this is how I
narrate the scenes of this life and how
you mark my version of the night
against what really happened. This
is the way I make sense of darkness
and regret, how I let you know it’s
okay to lift the mask and let me out.
It’s how we survive, how we keep
going, or, at the very least, how we
know we haven’t stopped, despite
the dogs at our heels and the little
hook of death deep in our skin.

Taken on its own, the poem’s digressive, doleful whimsy smacks of Dean Young; its flippant fatalism reads like something out of Timothy Donnelly’s The Cloud Corporation; and its “armor, armor, armor” refers seemingly to Robert Hass’s “blackberry, blackberry, blackberry.” But “How We Survive” is a crucial poem in the context of the chapbook. In it, Rader articulates what we all know but often overlook: that our obsession with the materiality of text and paint—and frequent appraisal of these media as unfit to adequately represent our lives and experiences—resonates deeply with our anxiety about our own physicality, our own finite and incommensurate bodies. Rader reminds us that, as we seek to construct verbally our essentialized self-portraits, we only acquire new, textual bodies, complete with all the earthly encumbrances and stark inadequacies of the old ones. We remain terrified to “wake out of / the wrong body and walk uncovered / into the mistaken world.”

Yet, by writing honestly about the difficulties of self-representation, Rader represents himself as a writer who cares deeply about his audience and his craft. Just as his poems speak to those whose art has moved him, they speak to us, his readers, and invite us to be moved. While Rader might never truly unmask himself, I believe him when he writes, in the final poem, “I want / you to know the truth about everything.”