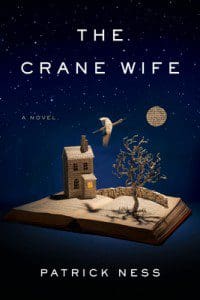 In the Japanese folktale Tsuru no Ongaeshi, upon which Patrick Ness’s wondrous new novel, The Crane Wife, is loosely based, a young rice farmer rescues a beautiful white crane that has crashed into his rice paddy. The crane’s fall is caused by an arrow still jutting from its wing; the farmer carefully extracts the arrow and bids the crane take care as it flies away. When he returns to his house, the farmer is shocked to find a young woman waiting for him there. She tells him she has come to be his wife and ignores his protestations of poverty. They begin a happy life together; soon the new wife barricades herself in her weaving room, alone with her loom. At her request, the farmer swears never to look inside, and she stays locked in the room for seven days. At the end of the seven days, she emerges, skinny as a rail, and presents her husband with the most beautiful piece of cloth he has ever seen. Sell it at market, she commands him, and there it fetches a high price. She returns to her weaving room and shuts the door. Curious as to the source of his wife’s skill, the farmer breaks his promise and peeks in. There, in place of his wife, sits the great white crane, weaving its feathers on the loom. When the crane sees the farmer, she sadly tells him she is the crane he saved, and that she had wished to repay him by becoming his wife. But now that he knows her true form, she can no longer remain with him. The crane removes the cloth from the loom and gives it to the farmer, then takes to the sky.

Ness’s The Crane Wife is no straightforward retelling of this old legend. (For one thing, there’s a volcano involved, which complicates matters.) But the story stays true to the surreal logic of fairy tale and myth. The novel does indeed open with a great crane falling to earth, but the man who discovers her is a lonely, middle-aged print shop owner. George Duncan is a mild-mannered American who’s lived in London for most of his life. His most striking attribute, as all the characters around him agree (including his ex-wife), is his habit of being notoriously, genuinely nice. Though a “pleasant enough man,” George lacks “that certain something, that extra little ingredient to be truly worth investing in. It was a mistake women often seemed to make.”


The morning after George frees the crane, a mysterious woman appears with a flourish at his shop, introduces herself as Kumiko, and asks George about making copies of a set of beautiful peculiar tiles, cuttings made from “slices of an impossible array of feathers.” Though she’s clearly proud of her work, Kumiko insists that “they are not quite there yet…they lack something.” Despite Kumiko’s clearly Japanese name, George “can’t put a finger on” her nationality” and asks her point-blank if she is Japanese.  She teasingly responds that “in the sense that my name is, yes, I suppose I am.” Intrigued by her “impossible” nature (“she was…impossibly beautiful, impossibly talking to him, but also impossibly present, so much so that what else could she be but a dream?”), George asks her to dinner.

George and Kumiko hit it off. Unlike most other women in George’s life, she’s attracted to him because of his “softness and kindness and respite.” So begins both their romantic and working relationships. George provides Kumiko with this place of “respite,” along with pleasingly amateurish paper cuttings that she interposes alongside her feather art. In combination, the feather-and-paper tiles are even more beautiful, and after a man “discovers” one of the works hanging in George’s shop, they become cultishly popular in the art world, selling their work for “extravagant sums.”

If George is soft his daughter, Rachel, is stony. A single mother caring for her young son while navigating the tumultuous world of office politics, Rachel can be cruel, though usually inadvertently so. (In college, for example, she drove away her roommate by mockingly describing The Wizard of Oz’s Cowardly Lion as a mincing pedophile, not knowing that her friend both adored the movie and had also been “fiddled with” by her grandfather).  It’s a cruelty born of her “permanent fury.” And though she may be her father’s polar opposite, she finds herself in a similar situation as George’s when the opens: lonely, and unable to connect with anyone, even her father.

Not content to simply retell a fairy tale set in a magic-less modern world, Ness alternates these scenes of George and his loved ones with increasingly experimental fragments—elaborations of Kumiko’s tile-pictures—that follow the story of  “the lady” and “the volcano,” two forces forever doomed to clash and to love one another. These brief, impressionistic scenes with their exuberant use of archaic, poetic language and surreal plot elements read far more like actual fable than anything else in the novel. The lady “flies for a lifetime” over the newborn Earth, granting “absolution wherever she lands,” literally “piercing hearts with her forgiveness, for of what do we ever ask forgiveness if not our offenses against joy?” The volcano refuses to be forgiven and transformed into peaceful mountain. Her tells her malevolently, while “lava and heat and destruction flow from him in waves,” that “the point of a volcano is anger.” As the novel progresses it’s clear that the timeless lady is none other than Kumiko. Who the volcano is, though, is less easily pinned down. He is personified with green eyes, but at some point the eyes of nearly every character in the book “flash green” in times of anger or poor-decision-making.

Ness, who has won several awards for his children’s literature, has a wonderful ear for language, and clearly abides by a motto of flourish and excess, a choice well suited to the story’s fairy-tale roots. Here’s how he describes George wondering what kind of bird has crash landed in his garden: “ ‘A heron?’ he thought. ‘A stork?’ But it was nothing at all like those hunched, purplish grey birds he sometimes saw skulking around the city like unwashed old gentlemen.” And he describes the “unearthly sound” of the bird crashing as “a mournful shatter of frozen midnight falling to earth to pierce [George’s] heart and lodge there forever, never to move, never to melt—but he, being who he was, assumed it was his bladder.”  Ness’s delight in such lyricism is spared from being overly precious by the narrator’s wry awareness of the text’s grounding in fable, though at times this falters. Kumiko, for instance, often delivers self-evident statements in koan-like aphorism so that is sounds (as George says) like she’s “[speaking] as if at the beginning of a story.” Occasionally, this tendency leads her to come off as Mary Poppins crossed with Yoda: “You know that not to be true…and so I ask you to think on it.”

Regardless, Ness’s sincerity and the risks he takes with traditional structure and narrative are exciting and a true pleasure to read, as is the attention he pays to a folktale not often examined in Western culture. The Crane Wife is a small gem of a book, one that plays with the conception of story itself and is unafraid to leave the reader with a sense of astonishment.