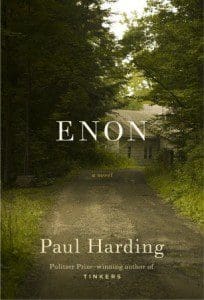 The protagonist of Paul Harding’s new novel, Enon (Random House; 256 pages), is Charlie Crosby, a bookish, New England house painter and the grandson of George Crosby (the protagonist of Harding’s Pulitzer Prize-winning first novel, Tinkers). Enon takes as its subject a year in the life of Charlie Crosby as he grieves for his only child, Kate, who is killed by a car while riding her bicycle home from the beach. In the days that follow, Charlie’s wife, Susan, departs for her parent’s house, a move that, even at the time, Charlie knows to be equal to the dissolution of their marriage.

Despite these losses, the early passages of Enon are, paradoxically, quite measured and calm. Granted, much of the first half of the novel takes place in the past as a couch-ridden Charlie recollects being with his daughter out in nature, hiking by the river or the bird sanctuary. As grief-stricken and self-destructive as he may be (Charlie breaks his hand punching a wall and shortly thereafter becomes hooked on painkillers), Charlie can only remember the good times, seemingly because that’s all there ever was. Enon, an otherwise highly realistic novel, is utterly free of any notes of parental regret. While Kate was alive “the world was love,” Charlie remarks. With her dead and him still “yoked to this life,” Charlie is “forced to suffer the joy of [his] life with Kate, unbreachable as it may be, in stark and ruinous contradiction to [his] life without her.”


Harding considers himself a transcendentalist, so it’s no surprise that Charlie Crosby narrates his outings with his daughter like an amateur naturalist. When Charlie takes Kate out to feed the birds in the sanctuary, one pecks gently at her palm, ignoring the seeds. It “sang a liquid, silvery little phrase that was so clear and so limpid it seemed without source,” writes Harding, “trilling in the air for an instant and evaporating without a trace.” Later, Charlie remembers entering with his grandfather into the home of Enon’s ancient and old-moneyed widow to fix a clock. “A window I could not see threw a cross-hatched apron of light across the floor at the far end of the hallway through which we had come,” says Charlie. When the clock’s case is cracked open, “The old air fell out of the clock, dry, held in the cubic shape of the case for who knows how many years until I opened the door…” Harding is a master at articulating minor detail and the way it functions within memory and nostalgia. When he’s at his best, there is a remarkable lyric sensibility to his descriptions.

As the story progresses and Charlie’s dependency on painkillers develops into a full-blown addiction, Charlie becomes a kind of ghost himself. Ravaged and gaunt, he takes to haunting his daughter’s grave at night. He begins to hallucinate. One night, he imagines there are three Kates—and in the morning he is forced to suffer the loss of her again, now in multiple. Every afternoon, Charlie wakes to a house littered in liquor bottles. No longer does he enjoy the afternoons outdoors; he spends them scrounging for pills and cough syrup. He covers the mirror in the bathroom to hide from himself. Through it all, however, there is an impossible sweetness to Charlie. Desperate for more drugs, he turns out to be literature’s most saintly home invader.

Enon is an eloquent second novel, with Charlie a brilliant (if implausibly lucid) narrator, yet the book can feel uncomfortably single-minded. The primary conflict of the novel is resolved in a way that is curt and unsatisfying, yet it isn’t a book one savors for its plot. Enon is deeply felt, and while not as virtuosic as Tinkers, Harding’s chops are often on display.