In our newest issue, ZYZZYVA asks: Having kids—what could possibly go wrong?

In Eric Puchner’s “Heavenland,” a stalled L.A. artist finds his style—and his relationships—severely cramped after the birth of his son.

In Vanessa Hua’s “A River of Stars,” a pregnant mistress in Southern California is cornered by the wishes of her married lover in China.

And in Kate Milliken’s “A Matter of Time,” a suburban mother hopes a dinner party with an old and successful friend can salvage her dreams.

Plus stories from Kirsten Chen (on a Singapore teen’s complex bond with her family’s Filipina maid), Kimberly Lambright (in which a direct connection is made between a foundering marriage and God’s angst), and Southern great Elizabeth Spencer (on a family wedding serving as the wistful homecoming for a divorced cousin).

In nonfiction, Anne Raeff ‘s “Lorca in the Afternoon” offers a requiem for a once estranged, anger-filled ex-boyfriend. And we introduce new writer Rosie Cima and her story (“Going Solo”) of a solitary young man haunting the neighborhoods and bus lines of Buenos Aires.

You can get a copy of the Fall issue here, or order a subscription to ZYZZYVA and we’ll start you off by shipping you the Fall issue. 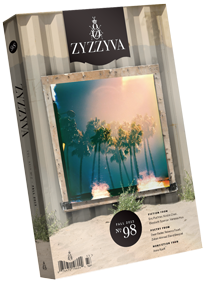 “In the Fall Issue” by was published in ZYZZYVA No. 98. Purchase the back issue in our shop.