From rainbow trout jumping in the Salmon River to watering holes on the edge of McCall Lake, each of the ten stories in author and playwright David Kranes’s The Legend’s Daughter (Torrey House Press, 172 pages) transports the reader to the wilderness of Eastern Idaho. While Kranes renders a common setting in each story, the collection is not simply a detailed portrait of Idaho, but an examination of the lives of restless people seeking to escape from their lives and find peace. 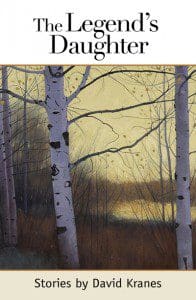 In “The Man Who Might Have Been My Father,” a fifth-grader and his mother strike out on a road trip from New York to Sunbeam Springs, Idaho, in a broken down car. Their trip is impulsive—the mother has been receiving letters from a man in Idaho she’s never met. Told from the point of view of the child, the story reveals that the mother’s quest is based on her dissatisfaction with her life. The poorly planned trip leads them through rural America, toward a state they’ve never visited on the small chance it might hold the happiness the mother desires. Throughout the journey, mother and child bond, surviving a series of mishaps, until they pull over outside of Sunbeam Springs. Whether or not the mother finds satisfaction in the mysterious man loses relevancy as the duo dive into the hot springs near the Salmon River in the middle of night. “‘You know if it’s just this,’ she said. ‘If it’s only this it’s okay’,” the mother says while they float in the warm water. Whether or not they stay once in Idaho is unimportant, for the moments of peace they discover floating in the water offer a release from the mother’s ubiquitous anxiety, allowing her to make new choices about their future.


“Between Projects” juxtaposes a woman’s unruffled life along the Payette River with the overbearing influences of the outside world. Karen, a ceramic artist, lives peacefully in her two-room cabin. But the arrivals of a famous actor, who is renting the cabin next door, as well as Karen’s criminal father throw her peaceful existence into the disarray from which she’s spent her entire life escaping. When the actor and the father bond, Karen has no choice but to flee the duo, driving to the edge of Stanley Lake and submerging herself in the water. Despite the tranquility offered in the wilderness of Eastern Idaho, she can’t evade the restlessness of other people. For Karen, the Payette River is a sanctuary, but as with many of the other characters in The Legend’s Daughter, her peace exists for only as long as the outside world doesn’t come dragging her back to reality.

Whether it’s the unraveling of a family or the materializing of marital problems, an uneasy desire for something new fuels Kranes’s characters. At the beginning of “Idaho,” Kranes writes of the protagonist, “For him, truly powerful love involves separation—the love-object across a continent. Better yet: a sea. Love next door seems prosaic.”  Throughout the collection, Kranes offers a richly rendered Eastern Idaho as a place just distant enough perhaps to find temporary solace.