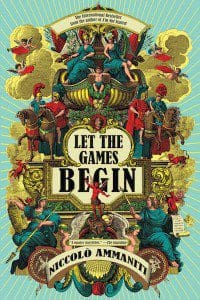 Let the Games Begin (330 pages; Black Cat/Grove Press) by Italian author Niccolo Ammaniti (and translated by Kylee Doust), is an oversaturated, bordering-on-cartoonish romp founded on a larger-than-life premise. A two-bit Satanic cult based out of Rome, the Wilde Beasts of Abaddon, is desperate to enter the ranks of the truly Evil. Though the Wilde Beasts have multiple instances of viaduct graffiti and a botched orgy/human sacrifice under their belt, a rival cult has recently “disembowelled a fifty-eight-year-old nun…with a double-headed axe.” Thus, their leader, Mantos, a furniture salesman who styles himself the group’s “Charismatic Father,” decides they need to gatecrash a massive gala happening in the middle of Rome.

Hosted by a real-estate mogul who’s converted the grandest public park in Rome, Villa Ada, into his personal safari range, the party is going to entail debauchery of every sort—feasting, hunting  (foxes, lions, and an albino Bengal tiger), and plenty of celebrity hooking-up. Mantos is determined to kidnap the evening’s planned entertainment, Larita, a former deathmetal singer who broke up her band when she converted to Christianity. The Wilde Beasts plan to sacrifice her to Satan in a blaze of gore and glory.


The absurdity of these over-the-top situational hijinks is tempered by the novel’s heavy satire. The character of the perpetually horny author Fabrizio Ciba, one of the luminaries attending the party and a protagonist in the book, in particular begs to be decoded. The current darling of Italy’s literary scene and a vulnerable, charming narcissist, Ammaniti’s Ciba is the quintessential type of celebrity intellectual, so carefully drawn that it seems improbable he sprang fully formed from Ammaniti’s head. (In an October 2009 interview in Corriere Della Sera, Ammaniti, who won international acclaim for his novel I’m Not Scared,  explained that most of his approach to Ciba was “teasing, playing with stereotypes … [Ciba] represents a little Mr. Hyde in me.” It seems likely, though, that Ammaniti is poking fun at more than just himself with Ciba. In the novel’s acknowledgements page, he writes, “obviously, this novel is the product of my imagination and of turbulent dreams. If you see things or facts that remind you of reality, that’s your problem.”)

In one scene, Ciba overhears the director of his publishing company disfavorably discussing his sales with another agent. Ciba is shocked to hear “that son of a bitch […] comparing him to an obese nun who wrote recipe books! […] Pennacchini was nothing but a big fat fake […] he had told him that Nestor’s Dream [Ciba’s earlier novel] was a necessary book, the novel of his coming-of age.” Ciba becomes so incensed he abandons the young, beautiful translator he was trying to seduce to go sulk. And in one of the most funny, distressing moments in a novel filled with scenes both funny and distressing Ciba learns the young son of his longtime lover—the wife of a powerful Italian businessman—has caught them in flagrante delicto. He apologizes to his lover, saying the “poor thing…must be in shock”; she responds by telling him her son “wants a pile of cash otherwise our fucking ends up on the Internet.” This, then, is the aspirational upper class milieu as revealed in Ammaniti’s novel: corrupt, surprised by nothing, and desperate for more (money, sex, time in the limelight).

Ironically, by the end of Let the Games Begin the members of the Wilde Beasts of Abaddon are the characters who come across as mostly good people. They possess emotional depth and believe in loyalty and friendship (as Silvietta, the High Priestess of the cult, puts it: “we’re doing the most important thing of our lives. We have to band together and love each other”). And they share a conviction that drives them to carry out their most gutsy mission, as despicable as it is. It’s the most sincerity we see from any of the characters of the book, who, ultimately, inhabit a Rome bloated with debauchery and celebrity obsession, teetering on the edge of a second fall.