You were supposed to keep your eyes closed. Jerry Adelstein knew this, but still he couldn’t help himself. Through his half-open lids he saw Nicki, or rather, the top of Nicki’s head a few rows in front of him. Her black hair was shiny and slicked back with massage oil, glistening like an otter sunning itself on a rock. Though he couldn’t know for sure, he would bet good money that Nicki’s eyes were closed. Unlike him, she tended to follow the rules.

But he shouldn’t be thinking about Nicki. He shouldn’t be thinking at all. Follow the breath, the teacher had said. If you feel your mind drifting, just label the thought: thinking, thinking. She made it sound so easy, as if it were no small matter to shut down the mind. To have thoughts, label them without a running commentary, then let them go, presumably to float up, up, up and away, to some sort of graveyard of lost thoughts.

The teacher’s name was Samjana, the Sanskrit word for awareness, but her surname was Resnick, and Jerry would bet—meditation seemed to put him in a betting mood—that her given name was something more along the lines of Sarah. Or Rachel. In another life, he might have seen her during Yom Kippur services, her head bowed in contemplation during the silent Amidah.

But instead, here they were at the River Bend Retreat, a former monastery situated, aptly, at a bend on the Snake River in Idaho: a thirty-something meditation teacher (not just any meditation teacher, as Nicki had told him back home when trying to persuade him. Samjana was a rock star, the Lady Gaga of meditation teachers) and he, Jerry Adelstein, a fifty-seven-year-old intellectual property attorney fresh off a triple bypass.

Now that, he really, really didn’t want to think about. If he thought about his heart, it would respond, as if in a pas de deux, by thumping irregularly against his chest wall. He peered at Samjana, still and stately as one of the trees outside the picture window which overlooked the rapids. Her legs were crossed in a full lotus position, and it seemed from the peaceful upturning of her lips that she could effortlessly remain that way until nightfall. Thinking, thinking. Behind Samjana, hanging high up on the wall, was a photograph of the Swami who had founded the place. When Jerry had first Googled River Bend, he found many references to the Swami, mostly involving his hasty departure years earlier amid swirling rumors of both sexual and financial impropriety. Thinking, thinking.

Mentally, he slapped himself. Snap out of it, Adelstein! Discipline ruled his life, from the half grapefruit he ate for breakfast each morning and the daily 3.4 miles around the reservoir (a thing of the past), to the color-coded files he meticulously kept on every client past and present. Christ, he even got through The Brothers Karamazov last summer when he and Nicki spent the last two weeks of August on the Vineyard, but this—just turning down the volume, slowing down the avalanche of loose data pinging through his mind—this seemed to be beyond him.


It had been his cardiologist at Mount Sinai who first brought up the idea of meditation.

“No, meditation.” The cardiologist hadn’t realized that Jerry was joking. What was the expression: about as funny as a heart attack?

“Be serious, Jerry.” This, from Nicki, who had been in the room at the time. “You know, I read a study last winter. There are significant benefits.”

Two weeks earlier, his chest had been sawed open, an event that occurred less than twenty-four hours after a stress test and subsequent angioplasty had revealed major blockage in three coronary arteries. It had been a routine visit—an annual checkup—and Jerry couldn’t help but feel that if he’d skipped the visit, none of this might ever have happened. It could have been, as his kids used to say when they were little, a do-over. No railroad track of an angry red scar in the center of his chest, still bare from being shaved pre-surgery. No new normal, a phrase he abhorred. And certainly no fucking retreat in the middle of nowhere led by a woman with a cockamamie Hindu stagename.

Sadjama tapped an ornate gong with a soft mallet, and a single, mournful note filled the room. Slowly people started to come back from wherever they had been, as if returning from a country to which Jerry had been denied access. It seemed like a peaceful place, if perhaps a bit boring, and he found himself wishing that he could at least visit—though he was certain he didn’t want to live there.

As the final vibrations of the gong faded into silence, he trained his gaze on Nicki, willing her to turn around. His fellow retreatants (was that even a word?) stretched and rolled their necks. Joints cracked. Knees popped. The rustling sound of a hundred asses shifting position. Come on, baby. Come to Poppa. Nicki lifted one long arm, then reached behind herself and scratched her back.

“And so.” Sadjama’s bird-like ribcage rose and fell. Her voice seemed to pick up where the gong left off, as if part of some sort of ancient chorus. “And so, we begin to see the contents of our minds. In following the breath, we meet ourselves.”

Jerry pictured a cartoon version of himself, shaking his own hand.

“We are like busy little monkeys, going, going, going so that we don’t have to consider the truth of our own insignificance, our brief time in this vessel, this physical body.”

Jerry didn’t see the upside of pondering his own insignificance. And he was quite fond of his vessel, thank you very much. His physical body staged a rebellion against Sadjama’s words. Surges of uncomfortable energy coursed through him, wave after wave. He wanted to do something. Maybe a few dozen push-ups, though that might kill him, or at the very least mess with the cardiac surgeon’s handiwork. You weren’t supposed to leave the room—another rule on a list of unspoken rules—but still he could feel himself on the verge of leaping up and stumbling to the door. Through the picture window, a foggy mist rose from the river. It looked almost like a photograph of a river, a postcard designed for tourists. If his thoughts weren’t real, then what was? Please, baby. Turn around.

As if he had spoken aloud, Nicki swiveled her head and looked straight at him, her large dark eyes gleaming. The rest of her face didn’t move. No amusement, nor frustration, nor concern creased his wife’s lovely brow. Her eyes, those twin pools, offered him exactly nothing, which was, of course, worse than nothing. A few seconds passed, maybe more. He was drowning. Nicki turned so that she was once again facing Sadjama, her posture as straight as a knife.

His grown children called Nicki “the homewrecker” when she wasn’t around. It was their loyalty to their mother that caused this mean streak, which was otherwise quite out-of-character. Amanda was twenty-eight, Ben, twenty-six. They were good kids, excellent kids, and Jerry was aware that he didn’t have any grounds for complaint. They had sailed smoothly through their childhoods on a sea of academic achievement: Dalton, then Taft, where they boarded during the divorce, and then Ben had followed Amanda to Wesleyan, where both had distinguished themselves. Law school for the girl, an MFA in poetry for the boy, though Jerry couldn’t help but wish it had been the other way around. It was only this one ugly word, homewrecker, which he had overheard as they planned his fiftieth birthday party, that let Jerry know that the wound of the split had remained open, festering. A blight on their otherwise blessed lives. Though, in Nicki’s presence, of course, they were unfailingly polite.

Twelve years since all that had happened—surely long enough to legitimize any sense of sordidness about the whole thing. Yes, Nicki had been a summer associate. Yes, he was a partner, and married, a family man who should have known better—who did know better. Nothing like this had ever happened, or likely ever would have happened if it hadn’t been Nicki. Only Nicki. He wasn’t looking for trouble. In fact, he’d thought of himself as relatively happy—as content, he would have said, as anyone trying to run a law firm and raise two kids in the pressure cooker of Manhattan. But when the firm’s number one recruit arrived at the beginning of that June in the form of a small, fine-boned young woman with the gait of a dancer, whose soft-spokenness masked a formidable intellect and, what’s more, a wicked sense of humor, Jerry found excuses to stop at her desk, to hand-deliver correspondence, to ride the elevator just as she was leaving for the day. An impulsive invitation for a drink, which led to dinner, which led to a lie to his wife about working late. The gentle, quizzical expression that first crossed Nicki’s face, that night, as some invisible hand began to knit the air between them, connecting them in a way that felt bizarrely inevitable. By the time he stopped to ask himself what he was doing, he had already done it. He had fallen in love with a woman technically young enough to be his daughter, and whom he had met through work. He couldn’t have made a bigger mess of things if he had tried.

“The whole world doesn’t just revolve around you, Daddy. What about us?” He could still hear Amanda’s wailing voice. She had been sixteen years old, and she thought of herself, her brother, and her mother as a unit. To violate one was to violate them all. But Jerry couldn’t explain to her, couldn’t barely even explain to himself the way he had been dying a little bit each year, the way he had been feeling numb from the neck down, a head bobbling along on a set of insensate shoulders, all brains and no heart, just getting through day after day. It wasn’t about sex, but rather, a desperate need to feel—to be back inside his body again.

“I’m sorry,” was all he could say, and say it he did, over and over again until the words broke down into syllables, until they lost all meaning. 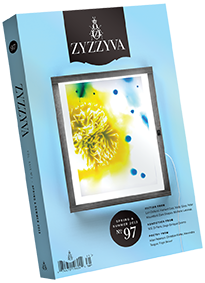 “Cardioplegia” by was published in ZYZZYVA No. 97. Purchase the back issue in our shop.