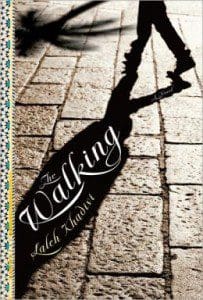 Laleh Khadivi’s The Walking (Bloomsbury; 258 pages), the second novel in her projected trilogy about Iran, follows two Kurdish brothers who escape Ayatollah Khomeini’s revolution in search of a paradise that doesn’t exist. Khadivi’s mellifluous prose traces a gripping journey, one ranging from the fleeing of a mountain town to traveling across a desert, the making of an overseas voyage on a freight ship, and, finally, arriving on the unforgiving streets of Los Angeles.

This is a story about illusions. The two brothers worship different ones that goad them onward — Ali betrays his family to defend his hopelessly ravaged Kurdish community, and Saladin follows the dazzle of cinema to Hollywood. Their exile begins when eleven Revolutionary Guards assemble the brothers’ fellow Kurds and neighbors for wrongful execution. Sweet-natured Saladin is unable to prove his loyalty to Khomeini by finishing off Babak, a peddler of German soccer balls. Instead, Ali fires three shots in the direction of the Guards, grabs his brother, and runs.


Khadivi interweaves their getaway with lyrical chapters describing the exodus of Iranians at large. Placed in this context of disembodied voices—a choir of frantic decision-making—the setting is a non-setting, a placeless diaspora. Yet the Iranian immigrants are drawn to the same place as Saladin: Los Angeles. In an informative chapter, Khadivi, who lives in Northern California, lists the ledger of Iranian immigrants’ arrival to the world’s cities. The top three were London and Istanbul (at a distant second and third, respectively), and, overwhelmingly, Los Angeles. “We are here because this is the direction the dusty air blew out of the projector and filled the sails of our imaginations,” Khadivi writes. Those who stay in Iran are guided by their nostalgia (“the photographs of you as a baby, the guitar we shared”) only to miss the things that mattered more: those who left.

Khadivi’s tone is haunting. Her lilting lists describe the objects of home, and become an incantation honoring the sacrifices made by the refugees of Khomeini’s revolution. Her description of the execution at the book’s opening is chilling: “A man with a wound to his mouth and blood for words.” She acts as a witness to atrocities by underlining their horror. At times, she uses a casual tone to explain life-or-death subjects, evoking indignant laughter. For example, Sharia law:

“That ancient thing where every woman has to wear a veil and every thief has his hand severed?

“We laughed nervously in the silence after their response.”

Throughout the brothers’ journey, Saladin pushes toward California, and Ali pulls backward to a vanishing home. Militant and dogmatic, tall and muscular, Ali constantly shakes his head at his younger brother: “At seventeen you still don’t understand that if you are a Kurd, you can never be anything else.” But what at first seems like loyalty to the Kurds eventually inspires Ali to leave his brother and betray his fellow exiles. Saladin puzzles over his brother’s deceit while he wanders Los Angeles alone. He is kicked, rejected, and abandoned to starve, until he finds a community of fellow immigrants, a relief that feels unexpected and absolute. Still, Los Angeles is not what Saladin had seen in the movies. “We had not at all become Americans,” the immigrants say, “but instead America, California, Los Angeles became a bit more like us.” Saladin, though working at a Persian rug store, has no sense of belonging among the patchwork of international strivers he encounters. In the end, unaware whether Ali is alive or not, Saladin “turns his bones south and walks on.” The Walking is a striking tribute to all that Iranians have lost.